It has been well documented in the literature that individuals with Down syndrome demonstrate difficulties with speech production and often present with reduced intelligibility. Many studies have suggested that the difficulties are characterised by a delay in phonological development [ 1-5 ] . Stoel -Gammon summarised the processes used by children with Down syndrome as cluster reduction, final consonant deletion, stopping of fricatives, pre-vocalic voicing, word initial gliding, word final vocalization, and devoicing of word final obstruents [ 6 ] . Others have suggested that a purely phonological delay is an over-simplistic view and that many people with Down syndrome also show developmental differences such as greater variability in production [ 7 ] and unsystematic replacement of final voiceless fricatives by other voiceless fricatives [ 4 ] . Roberts et al., who collected data from 32 boys with Down syndrome aged 4 to 13 years, found additional systematic errors not previously reported, for example palatal fronting, fricative simplification, deaffrication, and lateralisation of sibilants [ 8 ] . In addition to phonological processes researchers are beginning to suggest that children with Down syndrome may be demonstrating characteristics synonymous with a diagnosis of apraxia of speech [ 9,10 ] .

It is generally accepted that the speech problems associated with Down syndrome often lead to decreased intelligibility [ 10 ] . In a survey of 937 parents of children with Down syndrome over 95% of parents reported difficulties understanding their child by individuals immediately outside the family [ 11 ] . Buckley and Sacks reported that over half the adolescent girls and approximately 80% of boys in their survey were rated as unintelligible to strangers [ 12 ] .

Early studies identifying speech errors have been based on subjective judgments by trained listeners. Although valuable for many assessment purposes, such judgments can be highly unreliable [ 13,14] and give no precise objective information on activities of individual speech organs. Kumin states "there have not been adequate descriptions of the oral motor difficulties. There also have not been studies of various treatment approaches for oral motor difficulties and their results" [ 10: p.12 ] . Such information is vital if we are to obtain greater understanding of the speech motor control characteristics of children with Down syndrome. Hamilton goes as far as to claim that until rigorous objective assessments underpin precise diagnoses of their speech problems, interventions offered to children with Down syndrome are unlikely to be effective [ 15 ] .

The few instrumental studies of speech characteristics of children with Down syndrome have provided additional qualitative and quantitative speech production data such as undershoot of target articulations, abnormal patterns of lingual palatal contact, longer closure durations, longer transition times between consonants in cluster, slower DDK rates, etc. [ 15,16 ] . These studies have been based on very small numbers of individuals with Down syndrome (3 adolescents and one 10-year old respectively).

A 3 year project funded by the Medical Research Council using electropalatography (EPG) to investigate impaired motor speech control in children with Down syndrome is nearing completion in Edinburgh. EPG is a non-invasive technique which visually displays the timing and movement of the tongue's contact with the hard palate during continuous speech. It requires the individual to have a custom made artificial palate ( Figure 1 ) which fits snugly against the roof of the mouth. Embedded into the artificial palate are 62 electrodes that register when the tongue is touching them. An individual's articulation can be compared to standard patterns for English consonants (see examples in Figure 2 ) and error patterns noted. EPG gives objective and detailed analysis of the articulation and may identify errors which cannot be detected by perceptual analysis alone (e.g. double articulations). 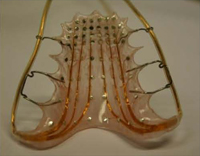 EPG can also be used to modify articulatory patterns by using visual feedback. A target articulation pattern characteristic of a particular sound is displayed on a computer screen and during a therapy session the child attempts to copy this correct articulation by monitoring their own contact patterns in real time (see Figure 3 ).The technique is particularly suited for children with Down syndrome for a number of reasons. First, the link between the speech movements and the visual display is a direct and conceptually very simple one. Second, by utilising visual feedback, EPG is particularly suited to individuals with Down syndrome whose visual processing skills are described as a relative strength. 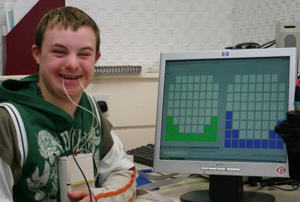 Assessment and therapy results from one child will be illustrated to highlight some of the errors and the improvements that are being seen from EPG therapy. This 11 year old girl with Down syndrome had a verbal age equivalent of 4.08 years and a performance age equivalent of 6.04 years based on results from the WPPSI-IIIUK. Assessment of language skills using the CELF-PUK suggested a receptive language age equivalent of 3 years 11 months and an expressive language age equivalent of 3.00 years. Analysis of the DEAP (Diagnostic Evaluation of Articulation and Phonology) revealed 57% of consonants were accurately produced which equated to an age equivalent of 3 years. Errors were summarised as follows: distorted and inconsistent productions of fricatives and affricates; voicing errors; weak syllable deletion; and cluster reduction. Analysis of the EPG data confirmed that fricatives and affricates were distorted and therapy focussed on remediating the production of /s/ and /ʃ/.. Only production of /s/ will be reported here. Figure 4 shows variation in the production of word initial /s/ for "sun". This girl had a variability index of 16.77 which contrasts with 7.04 for children matched for cognitive ability.

Following 24 therapy sessions the child underwent reassessment. This revealed an increase of consonants correct (PCC) as measured by the DEAP from 57% to 87% with a corresponding increase in age equivalence to 4 years. She demonstrated more consistent correct production of both /s/ and /ʃ/ with a variability score of 9.68 (see Figure 5 ). Cluster reduction remained a feature of her speech as did weak syllable deletion. 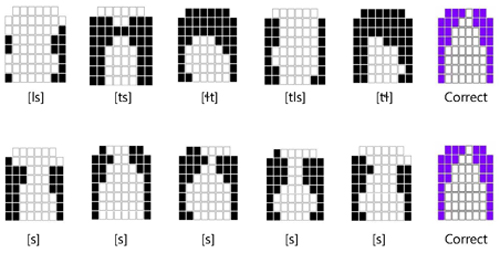