Sam is now 18 and, since September 2006, has attended Foxes Academy in Minehead in south west England. Foxes Academy is a training hotel and catering college that teaches young people with learning disabilities [1] . Until Sam was 16, he attended Altwood Church of England Comprehensive School in Maidenhead where he "passed" GCSE mathematics with Grade F. Incidentally, he also "passed" 7 other subjects getting grades of E or F but maths was probably his greatest achievement. So how did all this come about for a student with Down syndrome? 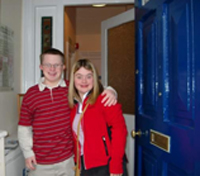 For those who do not know, "At the heart of the Kumon method of learning is the idea that each individual child can reach his or her potential, if given the right support and conditions. Kumon's programs aim to increase self-confidence and empower students with the skills to learn for themselves." [2]

Basically that means intensive (daily) practice of written mathematical "sums". It sounds tedious and boring and to a certain extent it is. However, the achievements are worthwhile and the improvement in self esteem is huge. As the work is graded in such small steps, it is possible to achieve again and again. Each child starts at the simplest level (for Sam this was learning to count and then count on from any given number eventually up to 100) and pupils are supposed to complete a set number of sheets of work each day, each sheet of about 10 - 20 questions practicing the same skill. The work is graded in the tiniest possible steps and Sam's Kumon instructor (who was not a trained teacher) allowed us to repeat the steps as often as I felt necessary. Children attend a Kumon center once a week and are supposed to work on that day's task unaided although I generally accompanied Sam. There is no doubt that the method is very tedious and that our patience was sorely tested at times. Work has to be completed every day and I mean every day. Sam has a sister 14 months younger and a brother 2 years younger so they all ended up doing Kumon. It must be admitted that I was the person who paced Sam's work - it is supposed to take 10 minutes but sometimes took up to half an hour depending on his frame of mind. As many parents will know, many youngsters can be extremely stubborn at times and Sam is no exception.

However, Sam's Kumon instructor was very flexible and Sam gradually learned, over the next 4 years, how to count, add up, subtract and multiply (even long multiplication) thousands, hundreds, tens and units. He never mastered division and still has not done so. We did not reach the fraction section although I know of two other children with Down syndrome who have continued with the program and can do fractions as well.

The Kumon methodology did not require any different input from the school. Sam's primary teachers saw a great improvement in his achievement and reduced the amount of physical materials they used with Sam. Teachers recommended Kumon to other parents - many, many children of all abilities go to the classes. I do not think that the method suits all children and would not replace maths teaching in schools with Kumon, but many children, who struggle with maths, would benefit from its simplicity. In fact, many bright pupils surge ahead at school after following a Kumon program and nearly all Japanese children do Kumon to stay ahead in class.

At least three other parents of children with Down syndrome have followed the Kumon program but I am not aware of any studies which prove its efficacy for children with Down syndrome. It would make an interesting study but there are many other factors which govern success especially where the children are completing extra work outside the school environment. For Sam, however, the "proof of the pudding is in the eating" - he took and "passed" GCSE maths and I doubt he would have done so without Kumon maths.