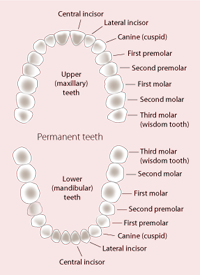 Nine dental characteristics have been described in children with Down syndrome [1] . These are macroglossia (enlarged tongue), fissured tongue, underdeveloped maxilla (upper jaw), tongue thrusting, congenitally missing teeth, malocclusion, high arch palate, increased salivation and microdontia (smaller than normal teeth). One of the most striking features of the facial characteristics of those with Down syndrome is the relative underdevelopment of the middle third of the face and the consequent tendency to a Class III skeletal base relationship [2] . There are deficits in the craniofacial anthropometric pattern profile in Down syndrome: subnormal scores of head length, circumference and the external canthal distance have been reported [3] .

Periodontal disease is the most significant oral health problem in people with Down syndrome. Manual dexterity difficulties may lead to oral hygiene problems. Plaque and debris accumulation, gingivitis and periodontal disease are common. Consequently, a large number of young people with Down syndrome lose their permanent anterior teeth in their early teens. Children and young adults tend to have fewer caries because of some associated conditions such as delayed eruption of primary and permanent teeth, congenitally missing teeth and microdontia. However, some may have increased risk of periodontal disease due to cariogenic food choices and reduced food clearance from the mouth [4] .

Participants were individuals with Down syndrome drawn from four day institutions for individuals with special needs in Lagos, Nigeria. Consent for participation in the study was obtained from parents and head teachers of the schools. Participants with Down syndrome were matched for age and sex with controls who were students from two nearby schools and some members of staff of those institutions. Questionnaires requesting socio-demographic information such as name, age, sex and educational background and medical and dental history were administered on each participant. Dental examination was carried out in the respective institutions in daylight on return of the questionnaires. They were examined for oral hygiene status, dental caries and malocclusion using the Simplified Oral Hygiene Index score (OHI-S) [5] , decayed, missing and filled teeth (dmft/DMFT) index and Angle's classification according to the WHO Oral Health Survey Basic Methods [6] . Educational background was determined by classifying the educational level of the mother, and where she did not reside with the child, that of the father, into:

A total of eighty-six participants were included in the study. They comprised 43 with Down syndrome and 43 controls without Down syndrome. There were 41 females and 45 males with mean age 14.15±7.84 and the majority were from the middle and low educational background ( Table 1 ). A total of thirty (70%) individuals in the control group had good oral hygiene, compared with 10 (23%) of the Down syndrome group while 3(7%) of controls and 17(40%) of the Down syndrome group had poor oral hygiene ( p = 0.00) ( Table 2 ). There was no significant difference in the oral hygiene status between male and female and educational background. 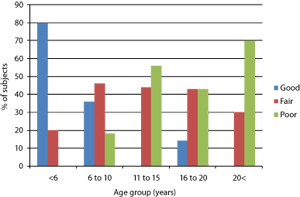 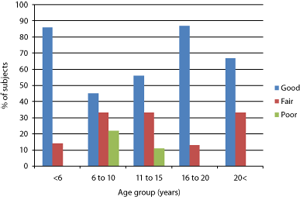 Many individuals with Down syndrome participating in this study had poor oral hygiene, a finding similar to that from previous studies [8] . The reasons for this may include the reduced manual dexterity of the participants, joint laxity (including the carpal joints) and the lack of comprehension of oral hygiene needs due to mental difficulties. They therefore need help to carry out routine oral hygiene measures. This seems clear in the lower age group of 10 years and below in this study, where the oral hygiene status of the Down syndrome and control groups is good, because they were being assisted by parents. As they grow older, the assistance they receive from parents and care-givers begins to reduce, because it is believed that an older child should not need help with tooth brushing. Therefore oral hygiene becomes poorer with age as seen in this study. Sasaki et al., reported 42% of individuals with Down syndrome with gingivitis in their study [9] . This finding is close to the 49% seen in this study, a significantly higher proportion than in the controls whose oral hygiene improved with age. It should be noted that at the 6-10 year age group when parental influence starts to reduce, there was no significant difference between the Down syndrome and control groups. Lopez-Perez et al., also found that the extent and severity of gingivitis and the extent of periodontitis were greater in a group of persons with Down syndrome examined compared with controls [10] . Two subjects in the 20+ years age group presented with Acute Necrotizing Ulcerative Gingivitis (ANUG). This condition has been widely reported in individuals with Down syndrome [11] . It was suggested that systemic dysfunction such as immunological deficiency in this population may predispose to oral disease which may in turn aggravate systemic disease [12] . It was also suggested that the secretion rates of IgA and IgG were diminished in individuals with Down syndrome, and this could account for the high prevalence of recurrent infections in target organs of the secretory immune systems [13] . It has been found that if the dental hygienist can successfully teach the patient and the care giver effective home care as part of the daily routine, gingival and periodontal conditions can be controlled or eliminated [14] . Parents and care givers should also be educated on the need to supervise tooth brushing for their wards with special needs, irrespective of age. Oral hygiene is effective only if the individuals with special needs are regularly helped by another person, which emphasizes the significance of care givers and/or family members for these individuals [15] .

The mean dmft/DMFT in this study is however still lower than the 0.7 of a National Survey in Nigeria [19] . This may be attributable to the small institutional population sample in this study. Most individuals with Down syndrome in Nigeria are still kept at home and prevented from going to any institution because of stigmatisation and low expectations among families. Therefore, the sample may be biased towards individuals receiving a particular type of care.

There was a high proportion of subjects with missing teeth in this study. More than half of the Down syndrome group had one or more missing teeth. This is a similar finding to many previous studies [20,21,22] . The teeth most frequently missing in this study were the maxillary and mandibular left third molars followed by the right third molars. The next frequently missing teeth were the maxillary left lateral incisor followed by the right and mandibular lateral incisor and canine. This contrasts with the finding from a previous study which reported the maxillary lateral incisors to be most often missing followed by the mandibular second premolar and maxillary second premolar [22,23] . It is however in agreement with the study of Jensen et al., and Shapira et al., [ 20 , 24 ] which reported a higher prevalence of third molar agenesis in 74% of individuals with Down syndrome older than 14 years.

The eruption sequence in Down syndrome can be irregular and the prevalence of tooth agenesis is increased in the primary as well as in the permanent dentition [ 20 , 25,26 ] . The clinical relevance of early recognition of hypodontia is an adequate treatment plan for maintenance of primary teeth or early orthodontic intervention [22] .

The prevalence of Class I malocclusion in the Down syndrome group in this study can be compared with the 46% reported by Scully and Cawson [11] . Nearly half of the individuals with Down syndrome had Class III malocclusion compared with only 4.7% of the controls. This feature has been commonly reported in literature [ 20 , 27 ] . This is a result of hypoplasia of the midface, and it is reported that the craniofacial dysplasia becomes accentuated with age [27] . This midface dysplasia also contributes to the narrow maxilla and crowding seen in individuals with Down syndrome, as demonstrated in this study in which there was a significantly high proportion of subjects with Down syndrome with crowding of the upper arch. The reported high prevalence of class III malocclusion in Down syndrome, however, varies widely from 40% to 61% [28, 20 ] . It has been demonstrated that an individual with Down syndrome can be an excellent orthodontic patient and should not be excluded from the patient population [29] . However, orthodontic prognosis may be poor because of learning disability, parafunctional habits and severe periodontal disease [11] . Peg shaped lateral incisor was also a common finding in the Down syndrome group. It was suggested that the slow rate of cell growth and a consequent reduced cell number which characterise the syndrome may be responsible for the underdevelopment of the upper jaw, the delayed dental development and the reduction in number and size of teeth.

The major limitation of this study is the small number of participants. Only four subjects refused examination and were therefore excluded from the study. It should be noted that only a small proportion of individuals with Down syndrome could be reached. Most of them still reside at home with no educational or vocational plan from parents and guardians because of stigmatisation. Due to their disability and an apparent lack of access to care, none of the participants in this study had been to the dentist, though the lack of access to care is not limited to those with Down syndrome. Healthier people in Nigeria still attend dental facilities only when there is a dental problem [30] . The treatment needs of individuals with Down syndrome in this study are more than that of controls. Other studies have also found a higher level of dental care needs in individuals with Down syndrome than in people without Down syndrome [31] . Since most of the factors which contribute to periodontal disease are present in these individuals - poor oral hygiene, malocclusion and deficient immune system - the dentist has an obligation to prevent oral diseases through appropriate activities and programs that take the special needs of the subjects into account [32] . Preventive oral hygiene and subgingival plaque control has been emphasized and considered of particular importance for children and young people with Down syndrome [9] .