The hard palate is viewed as playing an important role in the passive articulation of speech. Its probable role in the defective articulation of speech in individuals with Down syndrome has been examined in the present study. In individuals with Down syndrome, the hard palate is highly arched, constricted, and narrow and stair type with malformed misaligned teeth and a large and fissured tongue. As a result good palato-lingual contact is not achieved, with resulting defective articulation. Using orthodontic and prosthodontic principles could modify this situation, i.e. the anatomy of the hard palate. The altered palatal contour may give better placing to the tongue, leading to improved palato-lingual contact and articulation. The dimensional parameters measured were: average linear width (AVL), average curvilinear width (AVCL), average height (AVH) at different planes; average antero-posterior length (AAP), average volume (V), palatal arch length (PAL), and palatal index (PI). The findings were compared with those of controls of the same age and sex. The AVL, AVCL, AAP, PAL, V and PI values of patients with Down syndrome were found to be less than the corresponding values of controls and the average height values of patients with Down syndrome were greater than the corresponding values of controls. Statistical significance was observed in all measurements between the controls and the patients with Down syndrome, especially in those concerning the height and the volume of the oral cavity. Observations from this study have suggested that prostheses might be designed to modify the palatal anatomy and produce better articulation in people with Down syndrome.

The hard palate is a neglected area in the field of anatomical research as there is little morphological or metric analysis carried out in this area. The hard palate in the present study has been viewed only as an important passive aid to speech and as a probable contributing factor in the defective articulation of speech in individuals with Down syndrome. 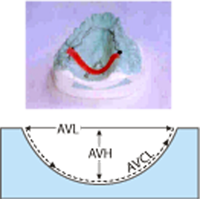 Textbooks describe the hard palate in individuals with Down syndrome as high arched, constricted, narrow and stair type. These findings are based on clinical examination. The characteristic teeth in individuals with Down syndrome and the bald and fissured tongue may be treated conservatively but not the hard palate and relatively large tongue. Given this situation, it has been thought that the anatomy of the hard palate might be modified to an extent by applying orthodontic and prosthodontic principles. In turn, the palatal contour and volume might be modified, leading to the better placing of the tongue inside the oral cavity; this might lead to improved palato-lingual contact and hence improved articulation of speech. Based on this view, this study has identified certain dimensional parameters of the hard palate and measured these with impression models in children with Down syndrome and in a control group of typically developing children.

Dental impressions of the 48 children with Down syndrome and the 48 controls were taken with the help of dentists. After drying and casting, the impressions were measured ( Figure 1 ).

The parameters measured were: 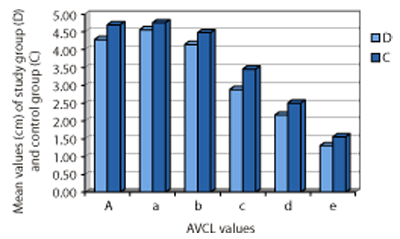 Measuring AAP (Average Antero Posterior Length): The tip of the most anterior gingival papilla in the median plane was located and, with the help of the strip of modelling wax, the antero-posterior distance between the point mentioned above and a point at the fovea palatini was measured along the median antero-posterior plane of the model. The procedure was carried out twice and the average of the two readings was recorded as the AAP in cms. 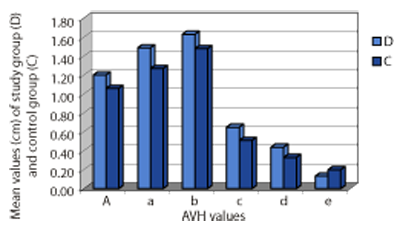 Measuring (V) volume: The impression models were soaked in water overnight to prevent absorption of water due to the hygroscopic nature of the impression material and were then dried. Coconut oil was lightly smeared over the surface of the vault of the impression models of study and control groups. The posterior gap of the palatal vault between the posterior most molars was then bridged with refined clay, the bridge extending along the palatal foveae in the midline and stretching across the vault on either side and to a height corresponding to a plane connecting tips of all gingival papillae across the model. The wall surface towards the vault was well levelled with Civil L. Water was then poured into the palatal dome so as to bring the water level to just cover the tips of the gingival papillae across the palatal vault. The procedure was carried out twice and the average of the two volume readings was taken as the average volume (V) in ml.

An alternative method was also proposed to detect the depth of the palatal dome. A well-circumscribed highest plane of an inverted U shape was marked in the vault of the impression models of study and control groups. Five points were marked at equidistance: two points L1 and L2 on the left side, two points R1, R2 on the right side, and a middle point M was marked in the middle along the median plane on the U shaped plane. 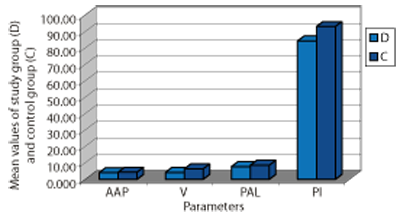 Another lower plane including the tips of all the gingival papillae of the shape naturally being an inverted U correlating to the alveolar margins of the maxillary teeth was identified. Five points were marked on this arc similar to the method mentioned above in the impression models of both study and control groups. An electronic caliper was placed vertically at each point such that the points R1, R2, M, L1 and L2 of both the planes were in a straight line vertically. This exercise was carried out on the study and control models on a flat surface in a well-lit room and at a level corresponding to that of the eye level of the person carrying out the exercise with the conditions mentioned above. The distances between the corresponding points on the lower plane and upper plane were measured by adjusting the screws of the calipers. The readings were recorded as heights at R1, R2, M, L1 and L2. This exercise was repeated again and the average of the two was recorded for gauging the height of the palatal vault. The readings for the study group and control group were tabulated and the 't test' was carried out on the data.

Tables 1 to 5 show the mean and S D values for each parameter (one each for AVL, AVCL, AVH, Depth and one for AAP, PAL, V and PI); the graphic representations for the same values ( Figures 2 to 6 ) are also shown.

The literature on palatography has suggested its use as a means of demonstrating palato-lingual contact during articulation. Calculation of the Palatal Index (PI) by the formula PI = Palatal Height / Palatal Length has been mentioned, but methods of measuring these indices have not been described [ 1 ] . The successful use of oral-myofunctional therapy techniques in treatment of speech articulation disorders by palatal augmentation has been reported [ 2 ] . Results after assessment of adaptation to palatal modifications have been found to be good [ 3 ] . Three types of palatal plates have been designed to achieve different effects and 65-75% results have been achieved in all the three categories.

In a rehabilitative study, 25 patients with dysarthria of various types due to motor problems have been treated with palatal lift augmentation prostheses. Twenty-one patients showed improvement in their dysarthria, 10% had reduced hyper nasality and a 6% improvement in speech [ 4 ] . Treating 69 children with Down syndrome by Castillo-Morale's therapy has resulted in improvement in tongue position, upper and lower lip tonicity and position, mouth closure, drooling and suckling [ 5 ] . Carlstedt et al., [ 6 ] have reported palatal plate therapy as a valuable component to a training program for improving oro-facial muscle function in children with Down syndrome and also for better speech development [ 7 ] . 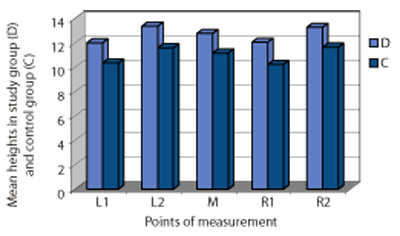 Orthodontic treatments of various types in children with Down syndrome with malocclusion have been described and encouraging results have been reported [ 8 ] . No studies in the field of palatometry were found. The present study has identified parameters from statistically significant differences in hard palate dimensions between children with Down syndrome and a control group. The hard palate in children with Down syndrome was found to be high arched and narrow, with acutely aligned palatine plates. The increase in palatal height is associated with a constricted palate, contributing to the projecting of the tongue in individuals with Down syndrome. During articulation, this factor could result in inefficient palato-lingual contact, resulting in defective phonation in these children. In addition, the angulation of the palatal plates of the maxillary processes may be acute during development, resulting in the constricted hard palate and smaller volume of the oral cavity.

The anatomically distorted hard palate could be modified to a great extent by means of expanding the palatal arch, a routine procedure in orthodontics.

The present study has provided a base-line in the measurement of dimensional parameters of the hard palate in children with Down syndrome and an age- and sex-matched control group. Appropriate strategies to improve palatal morphology in people with Down syndrome may be designed to improve their communication.