Objective: This study aimed to determine the prevalence of periodontal disease among children and adolescents with Down syndrome and the possible repercussions of such pathology in the quality of life of the group in question. Method: The sample consists of 93 individuals with Down syndrome 6 - 20 years old, living in Brazil (Minas Gerais). Periodontal probing was carried out on every site of each tooth. The Plaque Index and periodontal clinical parameters were recorded. A broad interview was carried out with the mothers, consisted of an adaptation of the Oral Health Impact File OHIP-14 that was used to measure the negative repercussions of periodontal disease in the daily lives of these individuals. Results: The prevalence of gingivitis was 91%, whereas periodontitis was found in 33% of the individuals. When the impact of periodontal disease on the quality of life was correlated with the clinical periodontal parameters, it was observed that there are significant statistical differences among them: bleeding on probing, probing depth and attachment loss. These same results, correlated with all the different groups that are categorised according to the diagnosis of periodontal disease, also show significant differences. Conclusions: Periodontal disease can be considered as a condition with high prevalence within the group in question, which has negative effects on the quality of life of the subjects. These effects are aggravated by the seriousness of the disease.

The sample of this cross-sectional study was chosen from children and adolescents supported by the PROJETO DOWN 2000, operating in the city of Juiz de Fora (Minas Gerais - Brazil). The study was focused on a group of 93 patients with the following characteristics: the patients attend the aforementioned project; their ages ranged from 6 - 20 years old, they were racially heterogeneous and socio-economically homogeneous.

From the examination onwards, the periodontal clinical parameters - bleeding on probing, probing depth and attachment loss - were recorded in periodontograms, according to the model that is adopted in periodontics at the Faculty of Odontologgy of the Federal University of Minas Gerais, Brazil. The bleeding after probing was marked on each site, according to a dichotomous pattern: presence (+) or absence (-).

In order to evaluate the reliability of the results that were achieved, the exams were repeated in 10 patients, totalling 832 areas, so that intra-examiner agreement could be evaluated. The Kappa's agreement obtained results that were considered excellent - higher than 0.75. In relation to the Plaque Index, an adaptation of the Turesky-Gilmore-Glickman Modification of the Quigley-Plaque Index was used [ 6 ] .

To calculate the prevalence of periodontal disease in the study group, the following diagnostic criteria were adopted:

Interview with the mothers

The objective of the interview was to evaluate the repercussions of periodontal disease on the quality of life of the patients with Down syndrome. An existing questionnaire was adapted to better examine the particular impact on this special population [ 11,12 ] . The Oral Health Impact File OHIP-14 [ 13 ] acted as a basic reference in this new task. In the present study, however, the questions were presented to the mothers. This modification was made to facilitate the conduct of the interview as well as to maximize the understanding of the questions. However, the son or the daughter was always present during the interview and whenever possible were encouraged to answer together with the parents.

Some questions were excluded and others that were of greater interest to the investigation were added. Thus, the modifications were that the questions were addressed to the parents and the original questions 5, 6, 8, 9 and 10 were replaced by others related to periodontal health.

The evaluation of the factors affecting the quality of life was carried out using the Kruskal-Wallis Test (3 or more samples) and the Mann-Whitney test (2 samples).

According to the methodology that was applied, the oral hygiene of 68% of the individuals could be classified as bad or extremely bad, showing severe deficiencies in the preventive practices of oral hygiene.

This was the most prevalent variable, affecting 91% of the individuals.

Adopting the cut-off points previously described for the criteria of diagnosis, the results showed that 33% of the female patients had PS ≥ 4 mm, whereas in the male group only 25% scored on this variable. The difference between the two groups was not statistically significant ( p = 0.074).

The instrument that was adopted covered a range of points from 0 to 52. The higher the points, the higher were the repercussions on the quality of life. The results varied from 0 to 40 points, with the following distribution: 36% of the patients had from 0 to 5 points, 28% from 6 to 10 points, 22% from 11 to 20 points and 14% from 21 to 40 points. Five questionnaires that were filled in were excluded because of the number of "not known" answers ( Table 1 ).

The question related to speech impairment had the highest average, that is, 3.7 points.

The second highest average was found in number 10 with 1.3. As far as the negative impact caused by bleeding gums is concerned, the purpose was to investigate whether those with Down syndrome complained about this factor. The bleeding gum as a clinical component is easily diagnosed by periodontal probing and it is the necessary norm to treat it. The aim of the aforementioned approach was to go beyond the mere detection of this phenomenon and measure how many patients were suffering from having such a condition. This subjective component could be called the expressed or perceived necessity for treatment [ 14-16 ] .

Question 12 deals with the detection of halitosis and question 5 is concerned with the redness and swelling of the gum. According to the mothers who were interviewed, 20% of them said that they "always" perceived the bad breath of their Down children, with a final average of 1.2. In relation to the external appearance of the gums, 20% of them said that their children were "always" complaining about the gums because they were either red or swollen.

Questions 13 and 8, scoring, respectively, 0.7 and 0.4, refer to the perception of the mothers about the quality of life of their children with Down syndrome. 76% of the mothers thought that gingival problems never affected the health of their children, in contrast to the prevalence of 33% of periodontitis and 91% of gingivitis in the group.

When asked if other people irritated their children because of problems in the mouth, gum or teeth, 84% of the mothers answered that this had never occurred.

The questions that had the lowest scores were related to the possible difficulties of doing activities and fulfilling obligations. The averages of such questions were 0.2 and 0.1. 95% of the mothers said that their children had never been completely unable to do tasks because of the problems that were dealt with in the interview.

The study also showed the percentages of the individuals who suffered each one of the repercussions in the questionnaire in the previous six months ( Table 2 ).

Table 2 | Percentages of the individuals who suffered, in the previous 6 months, each one of the repercussions in the questionnaire

The quality of life was considered worse in the group that had gingival bleeding in comparison with the group in which there was an absence of bleeding on probing.

A similar correlation was established between the quality of life and the probing depths ( p < 0.001).

The group whose values were higher than 3mm in the variable of the attachment loss showed greater negative repercussions in the quality of life ( p < 0.001).

The main point of this analysis was the hypothesis that periodontal disease was capable of generating negative effects on the quality of life of the individuals involved in the study.

In order to verify this possibility, the results of the quality of life were correlated with the groups that were categorised by the type of periodontal disease, namely: slight to moderate periodontitis and severe periodontitis.

The results that were obtained suggest that periodontal pathology was able to affect the health of its subjects, in a way that was statistically significant in all of the groups ( p < 0.001). 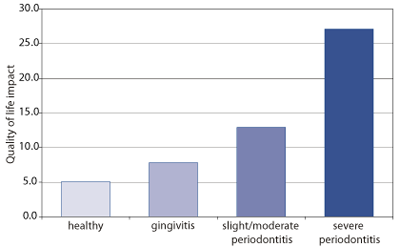 It is also worth mentioning that these negative impacts were more severe in proportion to the increase of the seriousness of the disease and that the difference was not only among the healthy and non-healthy groups, but also among the groups of patients that have gingivitis and periodontitis and among the groups of patients that have the two forms of periodontitis, which is also shown in Figure 1 .

Initially, the evaluation, in a highly critical perspective, should be focused on the fact that the question related to speech impairment had the highest average score. After all, phonation disturbances are extremely common among people with Down syndrome [ 18 ] .

Another important issue refers to the contrast of the results. Several previous studies detected that the acts of mastication and deglutition were among those that were the most affected by alterations of oral health [ 17 , 19-23 ] . It is highly probable that the discrepancy between the results is caused by the fact that the subjects of the other studies were much older, being a group of old people, partially or totally toothless.

In the present study, 40% felt discomfort about the gingival aspect. The importance given to the appearance of the teeth and gums seems to be intimately related to the individual and subjective concept of aesthetics and also to the self-examination of oral health [ 24 ] . Therefore, with regard to the patients that have Down syndrome, the result concerning the discomfort caused by the red and oedematous aspect of the gum can be considered high.

A plausible hypothesis might be that the result actually reflects the expectations of the mother in relation to the son's/daughter's appearance. After all, it is well known that there are methodological problems in the investigation of the reports of oral health among children, because the parents usually act as the "reporters" and what they state might not fully correspond to what is actually felt by their sons/daughters [ 25 ] .

It is also worth mentioning that if the subjective data is compared to the objective data in relation to the bleeding gums, it is possible to observe that, in this study, there is an agreement between the results that were obtained by the clinical examination and the ones based on subjective evidence.

In relation to the repercussions of periodontal disease in the quality of life of the group in question, the results show a significant correlation among all the clinical periodontal parameters and the scores obtained by the instrument that was used. It is possible to observe that clinical periodontal alterations, verified through the bleeding on probing, probing depth and attachment loss, therefore, able to cause negative impacts in the daily lives of these individuals.

Periodontal disease presented itself, therefore, not only as a necessary norm of treatment of the group in question, but also as a perceived or subjective necessity. This conclusion is possible only through the methodological combination between the clinical exam and the application of the instrument of evaluation of the subjective data concerning the perception of oral health.

The results achieved in this study, associated with the review of the scientific literature, show that there is a problem in the preventive odontological programs that deal with this special segment of the population, making it necessary to take effective measures to carry out early periodontal monitoring in children and adolescents that have this syndrome.