People with Down syndrome are living twice as long today as they did in the early 1980s because of medical advances and increasing knowledge concerning the treatment of people with Down syndrome ( Yang, Rasmussen & Friedman, 2002 ). Many scientists have found that adults with Down syndrome move slower, less coordinated, and less accurately than the typical population (see Weeks, Chua & Elliott, 2000 ; Ringenbach, Chua, Maraj, Kao & Weeks, 2002 ; Robertson, Van Gemmert & Maraj, 2002 ; Ringenbach, Ericsson & Kao, 2003 ; Ringenbach & Lantero, 2005 ). One important difference is how they interpret visual, auditory, and verbal information into appropriate movement responses. For example, imagine if a person with Down syndrome hears a car horn (auditory-motor), hears someone yell, "Get out of the way!" (verbal-motor), or sees a car coming close to them (visual-motor), which type of information would result in them moving to safety the quickest? Thus, finding instruction preferences for motor skills is important to develop methods of instruction that are more compatible with the learning processes of adults with Down syndrome.

Much of the research investigating the above-described model of atypical cerebral specialisation in persons with Down syndrome has used unimanual discrete (i.e., one time) movements (e.g., flip a switch) ( Elliott & Weeks, 1990 ). However, in activities of daily living people not only perform unimanual discrete actions (e.g., reaching), they sometimes perform bimanual discrete (e.g., pulling on pants), and bimanual continuous (e.g. clapping) movements. Recent research investigating bimanual continuous movements (e.g., clapping) revealed that adults with Down syndrome performed bimanual continuous movements more accurately in auditory-motor (i.e., auditory-motor advantage), than verbal-motor ( Robertson et al., 2002 ), or visual-motor ( Ringenbach et al., 2002 ) situations. These results are not consistent with the visual-motor advantage found for unimanual discrete movements in adults with Down syndrome predicted by the model of atypical cerebral specialisation. Thus, it is necessary to examine the generalisation of the model of atypical cerebral specialisation.

To our knowledge, no research has investigated discrete and continuous movements within adults with Down syndrome in the same study. Thus, the present study examined differences between discrete (defined as a movement performed once) and continuous (defined as a movement performed repeatedly over time) conditions in bimanual symmetrical movements. Secondly, a more real-world task (e.g., drumming) was used than has previously been studied (e.g., line drawing, circle drawing). Research has shown that people with Down syndrome have an affinity towards music and rhythm ( Edenfield & Hughes, 1991 ; Valasquez, 1991 ). Consequently, drumming movements were tested in order to maintain attention span and increase motivation. The purpose of this study is to examine differences in instruction type preferences between continuous and discrete bimanual drumming in adults with Down syndrome. Therefore, the working hypothesis is that adults with Down syndrome will show a visual-motor advantage for discrete drumming, but an auditory-motor advantage for continuous drumming, whereas chronological age-matched and mental age-matched comparison groups will perform similarly under all instructions and tasks.

Continuous and discrete bimanual drumming movements were both performed at self-selected amplitudes and in symmetrical coordination. The movements were performed on two drums, each with a diameter of approximately 25cm, separated by a distance of approximately 7cm. The drums were attached to a flat surface. Drumming was performed in the sagittal plane (e.g., up and down). Data was collected from sensors, attached to the ends of each drumstick, which were approximately 30cm long, using an electromagnetic tracking data collection system (Polhemus Ultratrak TM ). The position movement data was sampled at 120 Hz (samples/s) per sensor and was collected in the z dimension, which captures cephalo-caudal or up-and-down movements, and the y dimension, which corresponds to anterior-posterior or front-to-back movements. Drumming movements were coordinated following three different instruction types.

All participants were seated in a wooden chair positioned at a comfortable table height. Upon arrival, participants read (or were read) and signed the informed consent or assent forms. A parent or guardian also signed a consent form for the mental age-matched and Down syndrome participants. The handedness inventory was then administered and scored. The participants held the drumsticks labelled one and two in the right and left hands respectively. They were instructed to hold the drumsticks in front of them above the center of each drum with an overhand grip. Instructions were given to drum in time to the metronome following the different instruction types (i.e., verbal, auditory, visual). For each different instruction type, tasks were performed either bimanually discrete or bimanually continuous. Instruction type conditions were counterbalanced across participants. A total of 18 trials (three in each condition) were collected. The length of the entire testing session lasted no longer than 45 minutes in order to reduce attentional and motivational limitations. The total time for drumming was six minutes, thus we are confident that muscular fatigue is not a factor.

All data were filtered using a 5 th order 6 Hz Butterworth filter in both the forward and backward directions. For differentiation of the filtered data, a three-point central difference technique was used. All graphical and numerical techniques were completed using Matlab TM .

Relative phase was measured in the z-dimension. To obtain a continuous measure of relative phase, the displacement and velocity records for each movement cycle were normalised. The absolute difference between the phase angles of the left and right hands was calculated for each sample. The mean relative phase was calculated across samples within a trial. In keeping with the standards set by previous studies (e.g., Carson, Thomas, Summers, Walters & Semjen, 1997 ; Robertson, 2001 ; Scholz & Kelso, 1990 ), relative phase values between 0° and 45 o described in-phase, values between 135° and 180 o described anti-phase, and the range of 46° - 134 o described intermediate phase. The percentage of time during a trial spent in each of these coordination patterns served as an index of coordination stability.

For all analyzes, if there were no problem triarials, the first trial was eliminated as a practice trial and the remaining two were averaged across conditions. In addition, all analyzes were collapsed across gender because there were no expectations of gender differences in this type of task ( Ringenbach et al., 2003 ). Analyses of variance (ANOVA) were performed on mean movement time, amplitude and aspect ratio. Three mixed-factorial ANOVAs were conducted with a between-groups variable of Group (chronological age-matched, mental age-matched, Down syndrome) and three repeated measures variables of Task (discrete, continuous), Instruction Type (verbal, auditory, visual), and Hand (right, left).

For mean movement time, there was a significant main effect for task, F (1,27) = 34.39, p <0.001. This showed that the continuous drumming was performed for a larger duration (M continuous = 1061ms) in comparison to discrete drumming (M discrete = 646ms). This is reasonable considering the task differences, in which continuous drumming involved a reversal of movement. 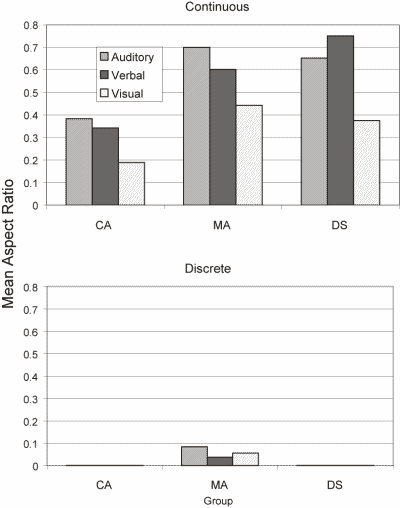 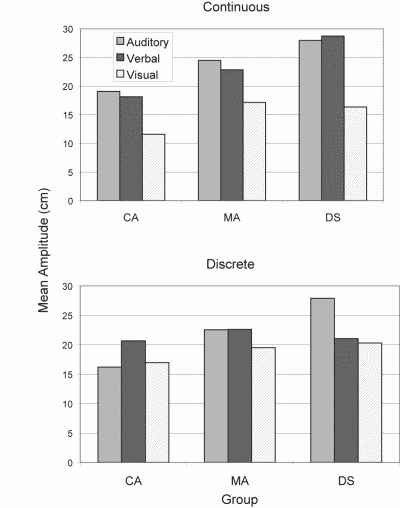 For the measure of mean relative phase, there were significant main effects for group, F (2,27) = 7.05, p < .004 and task, F (1,27) = 4.96, p < .04. Post hoc analysis indicated that chronological age-matched adults were more closely coordinated to in-phase than mental age-matched (M CA = 13.3, M MA = 23.24, M DS = 18.62) and that discrete movements were more closely coordinated to in-phase than continuous movements (M discrete = 16.82, M continuous = 19.9). These main effects were mediated by a task by instruction type interaction, F (2,54) = 3.27, p < .05. Post hoc analysis revealed that for continuous drumming, participants were less coordinated with visual instructions than verbal and auditory, whereas similar to movement path results, there were no differences among instruction types for discrete drumming. 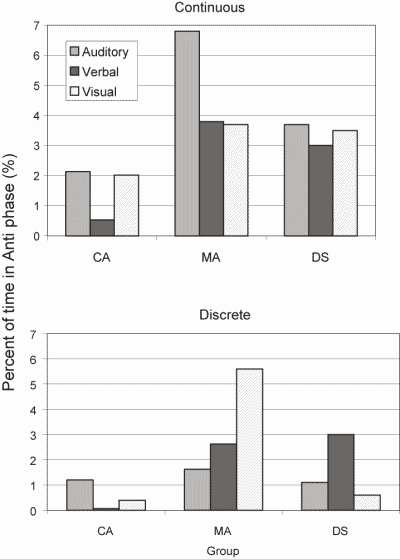 Overall, discrete drumming movements were performed with a more linear path and shorter movements than continuous drumming, which were performed with a more curvilinear path and with larger amplitudes. We believe that for continuous drumming participants moved a greater distance away from the drum and brought their drumsticks up and towards their shoulders to help keep the rhythm by filling the time between beats. This is likely because it is known that persons with Down syndrome have difficulty timing movements ( Chiarenza, 1993 ; Ringenbach et al., 2003 ). Thus, perhaps the adults with Down syndrome and mental age-matched adults utilised this strategy to overcome their timing difficulties. For discrete drumming this was not necessary because it was a one-time action.

For individual hand spatial-temporal measures, there were no performance advantages between instruction types for discrete drumming, whereas there was a performance advantage for visual instructions when performing continuous drumming for all groups. Specifically, when performing continuous drumming movements, the visual instruction resulted in shorter, more vertical movements than auditory and verbal instructions. These findings are not consistent with findings from previous studies and our hypothesis of an auditory instruction advantage for continuous movements ( Ringenbach, Chua, Maraj, Kao & Weeks, 2002 ; Ringenbach et al., 2003 ; Robertson et al., 2002 ). However previous research used non-specific visual instructions (e.g., blinking light), which provided only timing information about the specific tasks (e.g., circle drawing or line drawing) but no spatial information. The present study utilised visual instructions that provided timing and spatial information related to the desired movement (i.e., actual video tape of the drumming movements). Thus, we believe that the shorter, straighter movements with the visual instructions were a consequence of the participants matching their drumming movements to the video image on the screen, which showed small vertical movements. This is consistent with observational learning research that suggests that modelling is an efficient strategy for learning ( McCullagh, Weiss & Ross, 1989 ), even in persons with Down syndrome ( Biederman, Stepaniuk, Davey, Raven & Ahn, 1999 ). Our results also are consistent with the modality appropriateness hypothesis ( Welch, Duttonhurt & Warren, 1986 ) that states that visual information is best for spatial aspects of tasks.

In other measures, verbal and auditory instructions resulted in similar drumming movements. An explanation for this may be that participants processed the verbal instructions as an auditory beat, rather than actually interpreting the words. This would eliminate the processing delay that is characteristic of atypical cerebral specialisation for verbal-motor processing in adults with Down syndrome. Future research should randomize the order of verbal instructions (e.g., right, left, right, right, left, etc.) in order to evaluate verbal-motor processing.