Profiles and development of adaptive behavior in children with Down syndrome

The profiles and developmental trajectories of adaptive behavior were cross-sectionally examined in 80 children with Down syndrome ages I to 11.5 years using the Vineland Adaptive Behavior Scales. Profile findings indicated a significant weakness in communication relative to daily living and socialization skills. Within communication itself, expressive language was significantly weaker than receptive skills, especially when children's overall communicative levels were above 24 months. One to 6-year-old children showed significant age-related gains in adaptive functioning, but older subjects showed no relation between age and adaptive behavior. There was, however, increased variability within this older group, implying that not all children plateau in adaptive development during the middle childhood years. Implications for development in Down syndrome and intervention programs were discussed.

Many features of Down syndrome have contributed to the longstanding research interest in this disorder. Unlike other syndromes of mental retardation, Down syndrome has both a long history and a high prevalence rate (1.0 to 1.5 per 1,000 births). In addition, the syndrome is generally diagnosed at birth, facilitating research on the development of affected children across a variety of behavioral domains (Cicchetti and Beeghly, 1990).

Despite the long history of behavioral research with this population, certain features of adaptive functioning remain unclear. The first involves profiles of adaptive strengths and weaknesses. Although several researchers have recently compared the adaptive functioning of children with Down syndrome or autism, they did not examine profiles of adaptive strengths or weaknesses within their respective Down syndrome groups (Loveland and Kelley, 1988, 1991; Rodrigue, Morgan and Geffken, 1991).

An alternate view combines the slowing and stability hypotheses and has not yet been examined in relation to adaptive functioning. Originally proposed by Gibson (1966) to characterize cognitive development, this premise suggests that children with Down syndrome may alternate periods of gains in functioning with periods of little to no advance. Gibson (1966) proposed several periods of alternating advances and plateaus in these children's cognitive development, with the period from approximately 8 to 11 years being the longest and most prominent plateau before development again slows in adolescence. Before and after these plateaus, Gibson (1966) found that children with Down syndrome showed periods of relatively rapid development.

More recently, Fowler (1988) found a similar pattern of advances and plateaus in the grammatical development of children with Down syndrome. In a 7-year longitudinal study, Fowler observed that the MLUs of virtually all subjects showed plateaus between the ages of 7.5 and 10.5 years. This plateau was consistent across both high- and low-IQ subjects, with high-IQ children plateauing at higher MLU levels than did low-IQ subjects. Regardless of IQ level, these subjects showed no grammatical development during the 7.5- to 10.5-year period. Fowler's work on grammar - along with Gibson's (1966) on intellectual functioning - therefore describes an advance-plateau pattern of development in children with Down syndrome.

All subjects lived at home and, depending upon their age, were enrolled in either early intervention programs or special education classes in their local communities or school systems. Subjects were voluntarily recruited through these programs, which were located throughout three Northeastern states. All subjects were identified as having Down syndrome (with trisomy 21) by their local early intervention or school systems. Because lQs were available only for some of the older subjects, they are not used in these analyzes. All subjects were Caucasian and came from middle- to low-middle-class families.

Subjects' parents were individually interviewed with the Vineland Adaptive Behavior Scales - Interview Edition by a clinical psychologist or trained research assistant. The Vineland Scales assess personal and social sufficiency across three domains of functioning: Communication, including receptive, expressive and written skills; Daily Living Skills, or behaviors relating to personal grooming, domestic chores, and functioning in the community; and Socialization, or behaviors involved in getting along with others, playing, and coping with everyday demands. The Vineland Scales also assess motor skills in children up to age 5.92 years. Because this study contained children older than age 6, we did not include the Motor domain in data analyzes. Overall adaptive behavior age and standard scores are derived from the Vineland.

To examine profiles with increasing CA, we computed an analysis of variance comparing the age-equivalent scores on the three domains of the Vineland for children in three age-groups: 1 to 3.91, 4 to 6.91, and 7 to 11.5. Although children in the older age groups performed higher on the Vineland than did younger children, F(2, 76) = 52.31, p< .0001, there was no interaction between performance across the three domains and the child's age group.

Following Miller's (1992) findings of changes in receptive and expressive language with increasing CA and MA, we examined changes in communicative profiles in two ways. First, we performed a repeated measures analysis of variance comparing receptive and expressive age-equivalent scores across the three age groups. As expected, main effects were found for Communication subdomains, F(1, 77) = 20.11, p< .0001, and for age group, F(2, 77) = 33.10, p< .0001, but there was no interaction between the degree of expressive weakness and age groupings.

To examine the possibility that the relation between age and adaptive behavior may be stronger at certain points than others, we undertook a series of rolling correlations across successive 5-year periods. Correlations were performed between CA and both Vineland age-equivalent and standard scores for children ages 1 to 6, 2 to 7, 3 to 8, 4 to 9, 5 to 10, 6 to 11, and 7 to 11.5. As Table 1 illustrates, the relation of age to adaptive age-equivalent score was highest among younger subjects and lowest during the ages from approximately 6 or 7 until 11.5 years. Although the last age group represents a 4.5- versus 5-year span, the pattern of correlations suggest that the relation between CA and adaptive age is weaker during middle childhood relative to the early childhood years. It remains unclear exactly when in middle childhood the relation breaks down.

Figure 1 shows the relation between CA and Vineland age-equivalent scores for the entire sample. The first line shows the significant correlation between CA and age-equivalent scores for children ages 1 to 6.91, r(44) = .77, p < .001. The second line shows the nonsignificant correlation for children ages 7 to 11.5 years, r(34) = -.08. Even though the two age spans differ in length, there was a highly significant difference between the two correlations, z = 4.71, p< .0001.

Figure 1 also shows the increased intersubject variance beginning at approximately 6 or 7 years of age. Not all children plateau during the middle childhood years (i.e., not all children perform along the group's horizontal line for older children). Instead, the period seems characterized by some children developing, others plateauing, and still others regressing in adaptive skills. 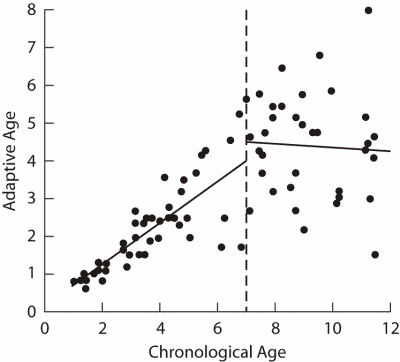 Figure 1| Plot of adaptive age and CA, and regression lines, for each of the two age groups of children with Down syndrome.

Profile findings point to a weakness in communication relative to daily living and socialization skills. Within the Vineland's Communication domain, expressive communication was particularly delayed, whereas receptive abilities emerged as a relative strength. Although these results confirm other reports of communicative difficulties among children and adults with Down syndrome (e.g., Miller, 1988; Silverstein et al., 1985), they also extend previous observations in several ways. For example, unlike previous researchers, we found that communicative weaknesses may be observed relative to other domains of adaptive behavior (e.g., daily living and socialization skills), not solely in comparison to receptive language or overall MA. Furthermore, we found that expressive skills were lower than receptive abilities even when using a measure focused on adaptive communication and not on measures of grammar, vocabulary, or other aspects of language that are characteristic of previous studies.

Alternatively, there may also be obstacles to development that are related to CA (Dykens et al., 1989; Hodapp et al., 1990). Specifically, results of the present study showed an advance-plateau pattern of adaptive development that was strongly associated with subjects' CA. Young children with Down syndrome ages 1 to 7 showed significant age-related gains in adaptive behavior, with little evidence for the generalized decline in development noted by previous researchers. Unlike younger children, however, older subjects with Down syndrome showed no association between age and adaptive behavior, suggesting an age-related plateau in the development of adaptive behavior during the middle childhood years. Although longitudinal studies are necessary to corroborate these cross-sectional findings, the present study parallels the plateaus in cognitive development manifest by Gibson's (1966) 8- to 11-year-old subjects and in grammatical development by Fowler's (1988) 7.5- to 10.5-year-old children. Collectively, then, these data provide evidence for an age-related developmental wall during the middle childhood years for children with Down syndrome.

Our findings also imply that not every child with Down syndrome plateaus during the middle childhood years. As shown in Figure 1, functioning levels of individual subjects varied widely during the 7- to 11-year-period, suggesting different developmental patterns across individual subjects. Perhaps only those subjects showing relatively more distinct or pervasive plateauing in development during middle childhood are apt to again manifest a deceleration or slowing of skills in later years.

Given the age range of subjects in the present study, it remains unknown whether the advance-plateau pattern of adaptive development applies to adolescents or adults with Down syndrome. Other genetic, mental retardation syndromes show variable patterns of adaptive development in the adolescent years. For example, males with fragile X syndrome may manifest adaptive declines in the 10- to 15-year period (Dykens, Hodapp, Ort and Leckman, 1993), whereas individuals with Prader-Willi syndrome show relative stability in adaptive functioning during their adolescent and adult years (Dykens, Hodapp, Walsh and Nash, 1992). Adaptive behavior in adolescents with Down syndrome may parallel a plateau in cognitive functioning observed by Gibson (1966) during the adolescent years.

Although future studies are needed that longitudinally document strengths and weaknesses, changing profiles, and trajectories of development for children with Down syndrome and other disorders, these and other findings provide preliminary evidence that may lead to more etiology- based programs of intervention. To date, various workers have advocated etiology-based interventions for children with fragile X syndrome (Dykens and Leckman, 1990; Dykens, Hodapp and Leckman, in press; Hagerman and Silverman, 1991), Down syndrome (Gibson, 1991), Prader-Willi syndrome (Caldwell and Taylor, 1988; Cassidy, 1992), and other genetic disorders of mental retardation (Hodapp and Dykens, 1991, in press). Findings that children with Down syndrome have specific adaptive profiles, changes based on level of development, and plateaus (with large intersubject variation) during the early and middle childhood years add to such etiology-based work. Such findings may ultimately lead to more precise training programs in adaptive skills - a goal of particular importance in light of the role that adaptive behavior plays in the long-term adjustment and success of individuals with mental retardation.

We thank James Leckman, Sharon Ort, Sara Sparrow, Victoria Seitz, and Theodore Fallon for their comments on an earlier draft of this manuscript.

Carr, J. (1988). Six weeks to twenty-one years old: A longitudinal study of children with Down's syndrome and their families. Journal of Child Psychology and Psychiatry, 29, 407-431.

Gibson, D. (1991). Down syndrome and cognitive enhancement: Not like all the others. In K. Marfo (Ed.), Early interventions in transition: Current perspectives on programs for handicapped children (pp. 61-90). New York: Praeger.

Hodapp, R.M. & Burack, J. (1990). What mental retardation tells us about typical development: The examples of sequences, rates, and cross-domain relations. Development and Psychopathology, 2, 213-226.

Loveland, K.A. & Kelley, M.L. (1988). Development of adaptive behavior in adolescents and young adults with autism and Down syndrome. American Journal on Mental Retardation, 93, 84-92.

Loveland, K.A. & Kelley, M.L (1991). Development of adaptive behavior in preschoolers with autism or Down syndrome. American Journal on Mental Retardation, 96, 13-20.

Miller, J. (1988). The developmental asynchrony of language development in children with Down syndrome. In L. Nadel (Ed.), The psychobiology of Down syndrome (pp. 167-198). Cambridge, MA: MIT Press.

Morgan, S.B. (1979). Development and distribution of intellectual and adaptive skills in Down syndrome children: Implications for early intervention. Mental Retardation, 17, 247-249.

Rodrigue, J.R., Morgan, S.B. & Geffken, G.R. (1991). A comparative evaluation of adaptive behavior in children and adolescents with autism, Down syndrome, and normal development. Journal of Autism and Developmental Disorders, 21, 187-196.