The following types of pathology was found in 15% of the siblings of the families examined: heart defects in 3.7%, neural tube defects in 3.2%, brain tumours, leukemia, retinoblastoma, insulin independent diabetes, cleft palate and lip, and mental retardation were detected in 0.5-1.0%. Repeated cases of Trisomy 21 were present in two families (1.0%) who had more than one person with Down syndrome. In another family the XO Karyotype was detected prenatally.

Analysis of the 190 pedigrees, including 32 with multiple marriages of mothers and/or grandmothers, suggests a cytoplasmic inheritance of the predisposition to Trisomy 21 ( Figure 1 ). 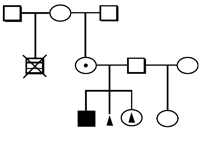 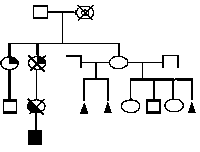 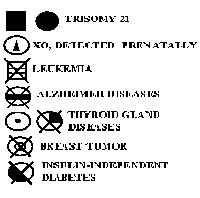 Figure 1 . The most demonstrative pedigrees

Examination of the extra chromosome 21 donors ( Arbuzova, 1996a ) showed an increase of free-radical processes in blood as measured by chemiluminescence (Imax), and a decrease of SOD-1 activity (Table 1).

Analysis of the age-dependent changes of these parameters shows that the increase of free-radical activity with age is also observed in control groups but is less significant than in donors of extra chromosome 21 and is accompanied by an increase in SOD-1 activity ( Arbuzova, 1996b ). The tendency towards a derds a decrease in SOD-1 activity in the control group is only noticed in women older than 40 years ( Figure 2 ). 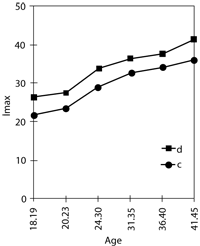 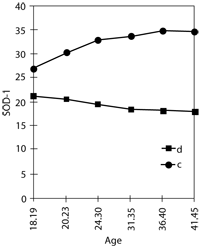 Increased free-radical activity could be the direct cause of chromosomal nondisjunction. It is well known that the action of free radicals during cell division can damage DNA molecules, decrease the conformative mobility of supermolecular complexes in nucleo-lipoproteins, affect adhesion of chromosomes, and affect centromeres and the spindle ( Halliwell & Gutteridge, 1985 ; Lee, 1963 ). Any of these events occurring during mitosis or meiosis impedes division and could cause cell death, chromosome aberrations and nondisjunction.

The changes found, such as somatic deletions and translocations, pericentric inversions and aneuploidic cells is similar to the effect of irradiation ( Uchida and Freeman, 1986 ; Lloyd et al., 1980 ; Uchida et al., 1975 ). We found a positive correlation between chromosomal aberrations in extra chromosome donors and the level of oxidant-antioxidant system disturbance ( Arbuzova, 1996a ).

Our data on the cytoplasmic inheritance of a predisposition to Trisomy 21 and biochemical changes in the donors of an extra chromosome as well as the well-known predominant maternal origin of extra chromosome 21 and the age-dependent frequency suggests that the mitochondrial genome is probably involved in the pathogenesis of Trisomy 21 ( Arbuzova, 1995 ).

In our opinion the mtDNA mutations in cases of Alzheimer's diseases, insulin independent diabetes, some cancers, in somatically healthy people of 40 years and older ( Shapira and Cooper, 1992 ; Richter, 1992 ; Shoffner and Wallace, 1992 ) might explain the connection of Down syndrome with these diseases and with aging.

The damage caused by free radicals and by radiation, is determined by the dose and duration. Depending on dose and time, pathological changes of varying degrees may or may not appear due to the compensatory responses of the antioxidant system. These factors could explain the controversial results of radiation on the frequency of Down syndrome ( Strigini et al., 1990 ). At the same time there are some convincing data about the effect of radiation on the increase of Down syndrome, especially in older age groups. These environmental factors may be independent, or they may be additive ( Uchida, 1981 ; Sperling et al., 1991 ).

It is difficult to agree with the view that free-radical damage in persons with trisomy 21 can be explained only by the secondary SOD-1 gene dosage effect ( Groner et al., 1994 ).

First, taking into account SOD-1 biochemical properties ( Fridovich, 1986 ) the increase in activity of this enzyme by a factor of 1.5, should not lead to such consequences. Moreover, our investigation of SOD-1 activity in people with Trisomy 21 from 1 month old to 45 years of age ( Arbuzova, 1996a ) demonstrated a decrease in enzyme activity with age ( Figure 3 ). 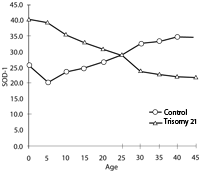 Second, if in new-borns with Trisomy 21, the level of free radicals is initially raised, the increase of glutathione peroxidase activity ( Sinet et al., 1975 ) becomes clearer.