The past two years have proved that this was indeed the right decision. Charlotte quickly settled into a routine, made new friends and continues to love her teachers, teaching assistants and her life at Gillingham School. The expectations of the staff are high and Charlotte is encouraged to learn in a caring and supportive environment. She really likes going on all the school trips, which have included weekends and a whole week away from home, organized for her year group.

When I discussed with Charlotte where she might like to work she suggested the police and the newsagent. Choosing the police was not really surprising as her favourite TV program has, for a long time, been The Bill! The handcuffs and police hat are regularly in use and she can rattle off your 'rights' when she arrests you for, say, 'a breach of the peace or on suspicion of murder….'

Even though the odds were against this choice, I decided to give it a try and so we visited the local police station together to make enquiries. We were advised to write to the Chief Constable for Dorset police to see if anything could be arranged within their community outreach program. At the same time I arranged for Charlotte to work in the local post office and newsagent. When Charlotte said she wanted to work at the local newsagent it seemed, at the time, quite natural as her sister Emily did her work experience there two years earlier. Isn't this the sort of thing younger siblings often do, taking the lead from an older brother's or sister's experience? What is more profound is that even though Charlotte has Down syndrome she was able to make that choice herself!

When Dorset Police offered Charlotte a two-day placement she was absolutely thrilled. Mind you, I had to labor the point that she would not be arresting any criminals, and the handcuffs were definitely staying at home!

During her two weeks' work experience she organized herself, arranged her clothes the night before, got up in good time, and went off to work where she made daily notes about what she did. In the post office and newsagent this included pricing items, filling shelves, packing goods behind the counter, making drinks, going on a paper round with a member of staff. She even spent a day behind the post office counter, under supervision. She chatted politely to the customers which prompted one customer to tell of a family member with Down syndrome who also had a job in a newsagent. 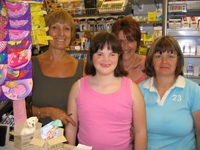 The two days spent working with Dorset Police were also very positive. Charlotte was welcomed by the Section Commander and was supervised at all times by PC Maureen Hayward. She did some administrative duties in the station, went out in the police car, (the highlight of her two weeks!) visited neighborhood watch co-ordinators and also went to another police station where she was shown the cells (empty at the time!). 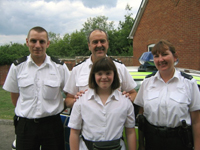 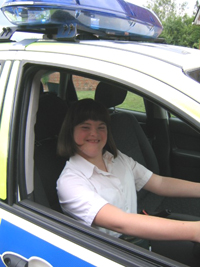 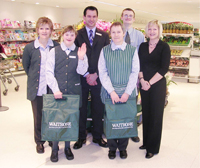