In this article we are presenting an outline of the experience of the Moscow Downside Up Early Intervention Center and our focus in our early support service. 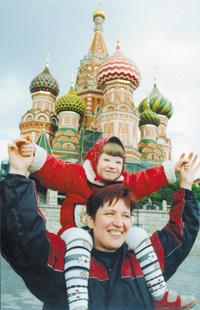 How are these requirements fulfilled at our Center?

Downside Up was established in 1996. Downside Up runs an Early Intervention Center helping over 500 families from Moscow, other Russian regions and the Commonwealth of Independent States (CIS). The Center is the only place in Moscow where direct services to children with Down syndrome are provided on a daily basis. In addition to home and center-based learning support for children from birth to seven years old the staff publishes books describing their experience, translates and distributes literature to increase awareness of Down syndrome and provides vital information to parents. The Center also organizes training and seminars for staff of maternity hospitals, kindergartens, babyhouses and rehabilitation centers.

First of all we should emphasize that there is a well thought-out system of stages in our work with the family. In our Center families are offered professional advice and support from birth to the time when they go to school (in Russia children start school at the age of seven). So there are two stages in the work of the Downside Up Center, and correspondingly, two types of program: Early Intervention Programmes and Pre-school Programmes. Among the Early Intervention Programmes there is a maternity hospital program, a home visit program and an adaptation group program, while the pre-school programs include individual and group session programs. It is important to note that on each stage psychological, pedagogical, social and informational support is provided to the families. A system like this allows us to work with the family for a long period of time gradually reducing the support, and helping parents of children with special needs to rely, more and more on their own resources.

One more essential factor in achieving success is the presence of a multidisciplinary team which consists of experts in various subjects related to the development of children with special needs, in our case, - with Down syndrome. Whatever work the team members do in our family-centerd model, they always consider the family as a system. Each team member gradually accumulates and begins to use expertise in closely related subjects. This allows us to arrange the work so that one professional having a wide range of knowledge and skills can be a home visitor capable to take a comprehensive approach to every child and her family. It allows the family to avoid multiple contacts with specialists, which is especially important in the early stages of the work with the family.

Infants with Down syndrome like other infants are ready to establish a primary interaction, however, their reactions and behavior have some specific differences. Many of them have sucking problems which can interfere with the interaction during feeding; eye contact can appear a little later, and in some cases be shorter; their smile can be less expressive and appears later, vocalization is not as active as in most other babies. In addition, infants with Down syndrome can have some sensory disorders.

The infant's development can also be affected by a secondary issue relating to the mother's responsiveness . Sometimes the mother's perception of her infants responses can be delayed; she may not notice behaviors as easily and therefore they go unnoticed and not be responded to. This affects the development of mother-infant interactions. The most typical mother's behaviors are described below.

In both cases, mothers who cannot "read" their infants' signals treat their peculiar behaviors as a lack of signals and do not respond to their initiatives. Instead, they guide them in all their activities. Therefore, the home visitor's role is to attract the mother's attention to her infant's signals and help to her learn to interact with the child and build relationships of cooperation.

At this stage, so called adaptation groups play an invaluable role. At these group sessions, all the above-mentioned characteristics of the mother-child relationship become noticeable because of the presence of others. In a desire to show her infant to the best advantage the mother often tries to repress any manifestation of her independence, she restricts her natural behavior and uses a directive style when she talks to her. Sometimes the mother interrupts the child's play, diverting her from one toy and giving another, even without using a verbal instruction.

In our Center parent support groups work permanently. A professional psychologist leads them. Recently a group of parents, whose children attend the Center regularly, set up a Family Club, and unexpectedly most parents took up this initiative. It was especially remarkable that mothers of very young children who do not attend group sessions yet joined the Club too.

We are far from considering the model described above a miracle cure solving all the problems families of children with special needs face. At the same time, we find it important to regard Early Intervention Centers not only as organizations promoting early development of children with disabilities, but also as Centers providing social and psychological family support.