I am nervous about sharing our experiences, because I realise everyone's experience of parenting is unique, and parenting a child with special needs is no different to that. Everyone has their own highs and lows, unique to each family (despite so many people thinking "children with Down syndrome are all the same!!!"). So all I can say is, this is our experience. I hope it might offer hope to others that, when things can seem rather bleak, the sun does eventually break through the clouds and, when it does, the view is so beautiful it will take your breath away.

The only way I can describe my experience of being a mum is to say it's like being on a train journey.

We are fortunate enough to have two fantastic boys, Joshua (aged 7) and Isaac (aged 4.5). My experience of bringing up Joshua has been like being on a fast train. Every thing he does, every achievement, every "journey" is like being on a fast train, it never stops until it reaches its destination. No sooner have we boarded the train, then it feels like we are there, already. Hardly time to even sit down on the train and enjoy the ride, before we disembark, already at our destination, moving on to the next challenge, the next milestone. 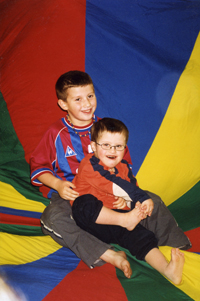 Parenting Isaac has been very different; no less brilliant, but still, different. Isaac is an amazing little boy whose perseverance at life over his short four years has been testament to his strength, his courage, his endurance, his humor. At a routine ante-natal scan, we were told that, due to complications with his heart, our child was "incompatible with life". We later found out that he also had Down syndrome.

My husband, Richard, coped with this news far better than I did. To say it was a shock is an understatement. I felt like my life had fallen apart. To cut a long story short, we both knew we had to give our son, Isaac, the best possible chance at life, he already felt a part of our family, and he was eventually born by caesarean section on 22 November 2000.

The response of those around us to the birth of Isaac taught us much about what lay ahead. Most people were fantastic, kind and supportive, but some were less so. A few stayed away for weeks after Isaac's birth, not sure what to say, too scared to come and meet him, or come alongside us in what was undoubtedly a very difficult time. That hurt more than I can say. And one person sent us a condolence card, in our grief ... at the birth of our son! Thankfully, we can laugh at that now!

On a positive note, one elderly lady, Dorothy, sent us a card after Isaac's birth - her wise words touched my heart, and did much to heal some of the unhelpful things we'd had to hear thus far. She simply said in her card, "God has entrusted Isaac into your care". Wow! That changed something in my heart - God had "entrusted" us with Isaac's life - suddenly it felt like a privilege, a daunting one, (if I'm honest, one perhaps I'd rather not have had in those early days) but still a privilege. Sadly, Dorothy died before I was ever able to thank her for her wise words.

Isaac spent many of his early days in hospital, and eventually at 15 weeks of age, he underwent gruelling open-heart surgery at Guys Hospital where the care and support we received was fantastic. The night before the surgery, my husband had gone home to be with Joshua. I remember holding Isaac in one arm, and a pen in the other hand. With the pen I had to sign the consent form for his operation - I had been told there was a chance Isaac would not make it through the operation. Was this going to be the last time I held him, my last opportunity to connect with him, to love him, comfort him? Signing that form was the hardest signature of my life, and yet I knew without the operation, he would die.

Thankfully Isaac came through the surgery fighting, covered in tubes, and looking dreadful, but alive, and fighting to breathe independently. My heart leapt with joy as I saw him because suddenly I felt it was safe to love my little boy. Up to that point, I confess I had struggled to bond with him because I was terrified we'd lose him during his surgery.

So, our kind, sensitive, generous, funny, elder son, Joshua, goes everywhere by fast train. He does it with great aplomb, surrounded by all his friends.

Parenting Isaac has been a very very different experience. With Isaac we go everywhere by slow train. We spend hours getting on to the train. And once on the train, the train stops at every single station. At every station, we stop, and we get off the train; sometimes we spend weeks or months at any given station, then, we get back on the train. We travel to the next station where, again, we stop, we get off and we spent weeks or months.

Alongside all of this, we are constantly aware of overtaking fast trains leaving us behind, shooting past, with other passengers, often much younger children, on fast trains, getting where we want to go, very fast. We stay on our slow train, mostly alone, and often lonely.

But then I realised recently what a lot I would miss if I spent my life on a fast train. The slow train gives me the opportunity to stop and enjoy different things. I have time to look out of the window and see so much beauty that you don't see from the fast train - there's no time.

On the slow train, we stop at the station and we spend time kicking leaves, watching trees, just being, laughing, talking, listening, growing, learning. The slow train has taught me the really important things in life are not based on what you achieve, but on health, happiness, kindness, being content.

So, my experience at parenting is a mixed bag! There have been, and there still are, many tears along the way - tears of loneliness, tears of exhaustion at the "fights" we have to "fight" on Isaac's behalf; tears of frustration; but too, tears of joy at watching our amazing boys grow up, and seeing how fantastic and patient Joshua is with his little brother whom he adores with all his heart. He'd want him no other way!

My life would be very shallow without the incredible lessons and privilege being mum to Joshua and Isaac has brought me and taught me. I love them both with all my heart and, to endorse Joshua's feelings, Richard and I would have Isaac no other way - he's perfect ........ just the way he is!