Joseph's not that keen on reading books, but he takes after me in a penchant for recording things. He's pretty computer literate and likes to check out the Liverpool website daily (he's a Liverpool fan). He also checks out the Eastenders website and one time, off his own bat, started copying out some of the story line.

We've always lived just a few hundred yards from local shops and he became competent enough at crossing roads from fairly young, so we encouraged him to go to our local corner store with a list to buy a few things, from time to time. We swapped phone numbers with Nick, the storekeeper, which was a very good idea: he phoned us up when Joseph turned up there without our realising he'd gone out, and wanted to buy some videos.

Some time ago, when Joseph's list of consumer wants moved up an octave in expense, from sweets and football stickers, to CDs and computer games, we realised that instant gratification had to stop.

I gave him a little notebook - really little, about 3 in. x 5 in. and slim - that could slip in a pocket, and a pen, so that he could make lists of things he wanted to buy, with their prices. When he comes home he can talk about them with us or his brother, who's a couple of years younger and very suss about computer games and CDs and all things electronic.

Now we're trying to get him to keep track of his spending when he goes out with our lovely young respite carer. At the moment I'm writing the basic template:

There's a gap under money spent for him to write in all the different expenses, for example, bus fares, café, snooker or cinema or presents bought. The idea is that he writes the expenses in as he goes and/or saves the receipts and does the sums at the end to check that he's included everything. He does still need help with the sums. 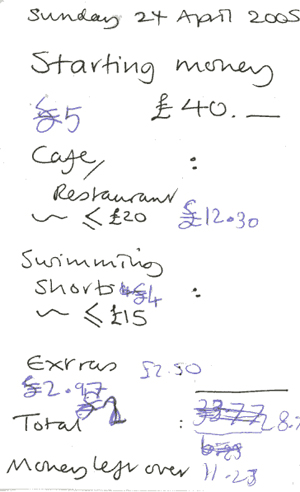 I think we need to talk with him about it more, talk about comparing costs. We're going to be meeting with a Direct Payments adviser soon: he's just 18 and we're preparing for Joseph to be able to handle income himself. At the moment we give him money on an ad hoc basis.

He has 2 bank accounts and goes online to check them. There was a bit of difficulty about that. My husband, Jon, sorted it out over the phone. He has a current account and a deposit account. When he earns some cash, for example from cleaning cars, or gets some for a birthday or Christmas, he goes round to the local building society branch and pays it in. He then comes home, goes online to check it's in that account and then transfers it to the deposit account. For some reason he can't pay it in ddirectly to his deposit account. His current account has a cash card and he can transfer money from his deposit account to his current account when he wants to go and buy something. Jon helped him by writing down the things he has to key in, password, number etc. That's on a piece of paper in a special drawer - he's very organized like that, in fact more than our 16-year old without Down syndrome, who has dyslexia.

That's the story so far. At the moment he's more interested in Liverpool beating AC Milan in the Champions' League on 25th May. I hope you'll all be rooting for them.