A major theme running through articles in this issue is the care of children with Down syndrome who have additional needs, arising from complex health problems or from having another disabling condition as well as Down syndrome

For many years, everyone working to improve the quality of life for individuals with Down syndrome has worked at understanding the needs of the majority. This has led to many important steps forward in understanding how development is affected by having Down syndrome, especially in the areas of speech, language and cognitive development. The awareness of the 'specific profiles' of development and how they can lead to more effective early intervention and education programs was a theme in the last issue of this publication. For many years, there has also been a need to raise awareness of the potential of individuals with Down syndrome and to raise the expectations of parents and teachers from the low expectations of the past. As we have made significant progress in understanding and advocating for the needs of people with Down syndrome, so we have also become more aware of the wide variation in needs and, in particular, of the needs of those with substantially greater levels of difficulties and disabilities than the majority.

Over recent years, when organizations have been focusing on educating the public and professionals to have higher expectations and improve educational and life opportunities for individuals with Down syndrome, some parents have felt that they and their children, were not being understood or represented by these campaign leaders. Down Syndrome Education International, like other organizations, has received and published letters reflecting this from parents who feel sad and demoralised when they read of the achievements of children with Down syndrome whose progress is way ahead of that of their own child. It is time that we focused attention on the needs of these children and their families, and worked to describe how their needs differ from the majority so that we can address them better.

There are several groups of children who might be described as atypical - not like the majority of children with Down syndrome. One group are children with complex health and medical needs such as the child described in the article by Donna Heerensperger, from Calgary in Canada. Sometimes families and children have to continue to deal with ongoing health needs that do not significantly affect developmental progress, but sometimes health complications lead to additional brain damage and seriously affect development.

Another group are the children with autistic spectrum difficulties in addition to Down syndrome. The core difficulty in autism is in relating socially to others. Most readers will be familiar with how social and socially engaged most babies with Down syndrome are - the way they make eye-contact, smile, enjoy babble games and go on to communicate in sign and speech. Most children with Down syndrome are keen to play with others, engage with family members, join clubs and socialise. In theory, a child with Down syndrome can also be affected by any other possible disabling condition or health problem and, on this basis, we would expect a number to be unfortunate and have autism and Down syndrome. We would predict that the number to have autism would be similar to the rates of autism seen in the larger population of children with learning disabilities. 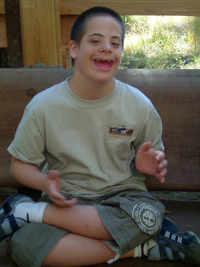 Other children who may be atypical are this with ADHD (attention deficit hyperactivity disorder) and those with unusually severe behavioral difficulties. We will turn our attention to these in future issues. Meanwhile, we would welcome any family letters and photographs if you would like to tell us about your son or daughter with additional needs. At the charity we are planning some research on this and we will start with collecting information from families. Keep an eye on our website for more news on this.