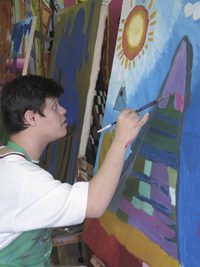 The work of fostering the creativity of people with Down syndrome bears an obvious relation to this. In our country and culture - an extraordinary blend of traditions - there is a noticeable predisposition for symbolic creation. Mexican children have a marvellous, almost innate perception of a world flooded with colors, textures and flavors which makes them greedy for sensory experiences. This, added to a family environment filled with traditions, myths and legends, means that our work has, more often than not, found fertile ground.

People with Down syndrome, moreover, are a sign that permits us to understand human coexistence beyond the spheres of narcissistic self-affirmation and fierce competition. They have an innate ability to enjoy life that does not require a comparative measure. They do not know much about themselves given that they have no urge to compete or compare; they are aware that they are different though they do not claim to be better than others for this reason. They have the will to transform and create , but do not define themselves as artists because of it.

Thus, in 1993, The John Langdon Down Foundation created The Mexican School of Down Art as an initiative promoting an educational model based on the development of symbolic comprehension, expression and creation. It was at first a recreational activity in the form of a painting workshop where materials were restricted to paper, cardboard, markers, watercolors and crayons.

Subsequently, in 1995, after observing what had been achieved and the artistic potential of students, the Foundation created a more extensive educational program in the visual arts, comparable to that of many professional courses. Thus, the creative power of people with Down syndrome could be more clearly expressed in the exploration of diverse materials and media (oils and acrylics, pastels, engraving). This allowed them to lend shape to work of great artistic value, similar in sensibility, technique and quality to that of professional artists: indeed, work that has been shown in prestigious venues in Mexico as well as abroad. 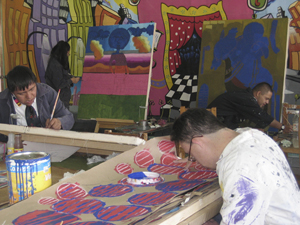 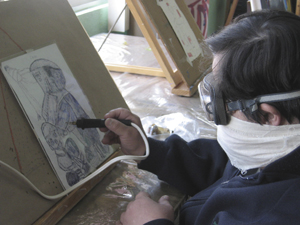 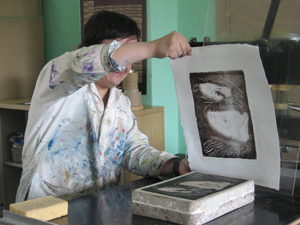 The project achieved such relevance that in 1997 the Foundation formally established the Mexican School of Down Art whose program includes a wide range of theoretical courses and technical workshops in painting, sculpture and engraving.

The John Langdon Down Foundation was started in 1972 as the first organization in Mexico and Latin America devoted to the education of children, teenagers and adults with Down syndrome. The driving force from that time to the present day has been its President and Founder Sylvia Escamilla. She was inspired to start the work by her own son with Down syndrome Eduardo, who sadly died in childhood. Sylvia started with a class in one room and today the Foundation has purpose built facilities for a school, art studios, assessment and education facilities. It trains professionals and provides consultation to government, organizations and to parents as well as direct early intervention and school services.