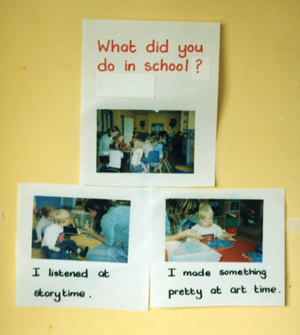 It has been so successful that Samuel will always bring up the subject when he sees his pictures posted. Typically, it will work like this: he looks at me and says "School! School!" which is my cue to say "so, Samuel, what did you do in school today?" He will look at the photo posted of him doing a specific activity e.g. playing with sand, and say "Played with sand". With my feedback form I might add on and say "You played with David didn't you?" Within a few weeks of practicing these phrases, Samuel has started to spontaneously tell me about his school day when I collect him in the car, without any visual or verbal prompts, using his 'learned' sentence structures. On these occasions I invariably find that the topic he tells me about is noted on his feedback form.

We became interested in the idea of making a visual calendar for Samuel, who is 3 years old, after reading about it in the DSii book Number Skills Development for Infants with Down Syndrome, 0-5 Years . The purpose of doing so was to present Samuel with a visual aid to comprehend the concept of time and to better prepare him for visits to the doctor, dentist, the dreaded hairdresser as well as more pleasant occasions such as birthdays and social outings ! 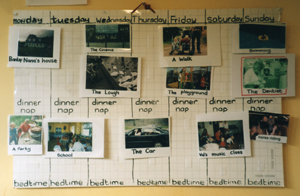 We got a large board 90x60cms and marked out clearly the days of the week. We used clear photos on laminated paper with a simple text underneath showing people, such as the dentist; activities, such as shopping; and places, such as the playground. It worked well to that end and indeed it helped him to learn the days of the week and remember that an event is happening tomorrow and not today. However, much more importantly, it has been the single greatest motivator for Samuel to initiate and sustain conversation. Its strength lies in the fact that it is very child centerd. All children like to talk about what they did and what they are going to do, and Samuel is no exception.