In 1974 Cornwell [ 1 ] said they only learn to count by rote, with no conceptual understanding. These difficulties in counting were used to account for their general difficulty in concept formation and abstraction. In 1978 Gelman and Gallistel [ 2 ] defined 5 principles to divide the counting skill. In 1987 Sue Buckley and Ben Sacks [ 3 ] published a study on 90 teenagers with Down syndrome who had received little early intervention and did not attend mainstream schools:

In 1988 Janet Carr [ 4 ] presented data taken from a longitudinal study of 41 young adults with Down syndrome: at an average age of 21, the maths skills compared to those of a typical 5 year old child, but the reading skills compared to those of an 8 year old. In 1988 Gelman and Cohen [ 5 ] found that children with Down syndrome learn the 5 principles late, but they could be trained by exercises (see Macquarie program of Thorley and Woods, 1979 [ 6 ] , and research by Joanna Nye and Gillian Bird, University of Portsmouth, 1995 [ 7 ] ). In 1991 Caycho, Gunn and Siegal [ 8 ] found counting skill had a correlation with the development of receptive language and then it could depend on the educative program and on the adult-child interactions.

In 1994 Billie Shepperdson [ 9 ] studied the reading and number abilities of two groups of English people with Down syndrome, the people of the first group were born in the sixties and the other were born in the seventies: as teenagers the seventies group had better performances in mathematics than the sixties group at the same age, maybe due to the better learning opportunities and, if teaching continues, they keep on improving into the adult years. In more detail, in 1995, Nye, Clibbens and Bird [ 10 ] found a correlation between numerical ability and receptive grammar. Some researchers found a significant correlation between mental age and numerical ability, others (as Baroody, 1986 [ 11 ] ) did not.

For the above reasons, special education teachers considered teaching academic skills in mathematics not useful but frustrating, and preferred to focus on community living skills such as the practical use of money and the ability to tell time. [ 12 , 13 ] This was a notable idea, which helped many disabled people to reach autonomy! My questions are: Are we sure they cannot learn more? Are we sure about what is basic in mathematics and what is the best path to follow in order to teach to each student?

In Italy, the inclusion of students with disabilities in mainstream classrooms has been warranted by law in elementary and middle schools since 1977 and in secondary schools and universities since 1992. [ 14 ] Students with Down syndrome may go on to secondary school, but, until now, no one has been able to get a secondary school diploma: they usually get a certificate of their achievements. So far no one with Down syndrome has attended University. In any case, in an inclusive environment, the teachers and children are motivated to try more academic skills, following the achievements of the typically developing students.

Inclusion in mainstream schools gives the child the opportunity to study different topics and try various activities. [ 15 , 16 , 17 , 18 , 19 ] The desire to work in the same way as their peers, gives them the will to do their best!

Since 1994 I have been counselling teachers in schools to adapt the mathematical program for students with Down syndrome. Usually the parents contact me at the Associazione Down Padova, to which I belong (also as a parent) and ask me to meet the teachers. Often my intervention is not limited to mathematics, but involves the entire curriculum and other aspects of inclusion. This activity has allowed me to follow up 20 cases of students with Down syndrome, included in regular classrooms, as summarized in the box.

Hence we have students with Down syndrome who learn to solve problems, to use fractions, to solve algebraic expressions (see Figure 1 ), to measure, to solve geometric problems, to draw geometric figures and diagrams, to use the computer. They are given slightly different tests when tested with their peers and if there are difficulties in mental calculation we suggest visual prompts, such as some simple memory device to carry, or a pocket calculator. 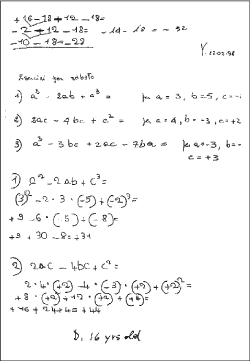 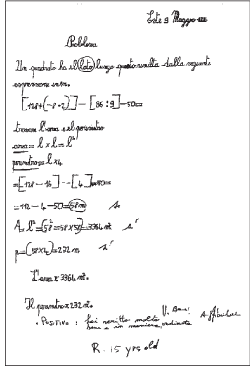 Figure 1 : Examples of work by Italian teenagers with Down syndrome learning algebra [ 24 ]

Since 1996 I have organized and managed continuing education courses at the Associazione Down Padova for adults with learning difficulties. In a course for illiterate adults, a 51-year old man with Down syndrome is learning to read, write, count and tell the time (see Figure 2 ). [ 21 ] He is so enthusiastic to learn and that gives us a joyful feeling! Other adults maintain and improve their mathematical knowledge. Adults who have attended mainstream schools have much more mathematical ability than those who have not. 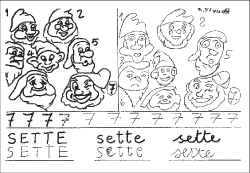 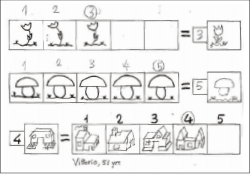 Figure 2 : Learning to count at 51 years of age

Usually people believe that arithmetical skills are the basis of the entire mathematical knowledge, because they are the first step in learning mathematics and because all people know them. This is illustrated in the 'old' maths tree in Figure 3 . Arithmetic is important, but there is much more that can be learned satisfactorily, and supports such as calculators, visual and other aids can be used to fill the gaps for the arithmetical difficulties. Persons with Down syndrome have notable logical abilities, abilities in space organization, in performing procedures, in understanding and using symbols: these are basic abilities, more important in daily life than arithmetical skills, and taking these as a basis, mathematical knowledge will be built up. This suggests a different conception of maths, illustrated in the 'new' maths tree in Figure 3 . Here arithmetic is seen as one branch of maths but not a prerequisite for learning other aspects of mathematics. I have reached this conviction by observing persons with Down syndrome and by listening to their teachers and parents, and I am doing research in this area. 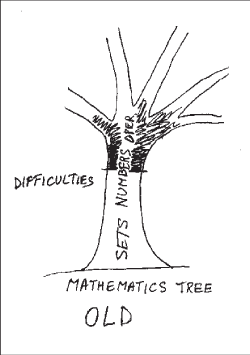 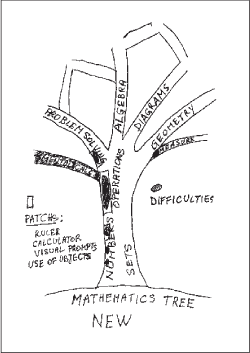 The more important motivation to study mathematics is to learn what everybody else is learning, which means to be included in the mainstream school. Other stimulation can be given by social or individual games [ 22 ] and by aims of autonomy, also for children in school (for instance, to learn the schedule of the day and of the week, calendars, telling time, use of money. [ 23 ] ) It is important also to give an active role to the child and believe in his/her abilities.

Most of the students have a successful inclusion in school and follow the class program in mathematics, adapted at a lower level, with simplifications and changes and take class tests (with differentiated tests). Usually they are not weaker in mathematics than the other subjects: it may happen, but the converse may also occur. We have to change our attitude about what is basic in mathematics and give more value to logical and mathematical abilities which do not involve computations. There are children who are good in mathematics and who like mathematics. Courses of mathematics for adults are also useful, because they can learn what they have not learned before. There are no limits of age in learning mathematics.