Teaching spontaneous responses to a young child with Down syndrome

Children with Down syndrome experience significant impairments in communication across a range of skills including articulation, morphology, syntax, and semantics[1-3]. While both receptive and expressive language are specifically impaired, the expressive language of children with Down syndrome lags further behind their receptive capabilities[4], affecting interactions with family, peers, and community members[5].

An area of expressive language in children with Down syndrome receiving little attention in the literature is spontaneity, defined by Charlop, Schreibman, and Thibodeau as "a verbal response to a nonverbal discriminative stimulus in the absence of a verbal discriminative stimulus" (Ref.6, p.156). For example, a child spontaneously comments, "I see a bird," in response to a bird flying (the discriminative stimulus [SD]), or says "Thank you" upon receiving a new toy (SD). In contrast, many children with communication impairments verbalise only in response to an adult's vocal directions to do so[7], such as commenting only when asked "What do you see?" or saying "Thank you" only when told "Say 'Thank you.'" Nonverbal stimuli to which children emit spontaneous utterances do not include explicit adult vocalisations, rather the important features may include nonvocal components (e.g., a bird flying) or the action of another person (e.g., presenting a new toy).

The impaired expressive language affects the communicative competence of young children with Down syndrome, including the spontaneity of language, further limiting their opportunities to interact with others. The child may not have acquired the appropriate verbal response to be emitted within the specific context. Additionally, a variable likely to affect spontaneity is the decreased saliency of nonverbal stimuli. Specifically, nonverbal stimuli may not be salient enough to exert control over a child's communicative behaviour.

Two studies addressing spontaneous communication in children with Down syndrome also utilised naturalistic teaching strategies. Warren, Yoder, Gazdag, Kim and Jones[14] taught a 20 month old boy with Down syndrome to comment on the presentation of a novel item. Hemmeter, Ault, Collins and Meyer[15] taught spontaneous responses to two children with Down syndrome (7.2 and 5.9 years). One child, who was taught spontaneous requesting (e.g., saying, "More"), showed poor maintenance and generalisation. For the second child, who was taught to comment (e.g., saying, "Big ball"), prompted comments increased during intervention, but there was little spontaneous commenting with no generalisation.

In a previous study, we addressed spontaneity in two preschoolers with autism using an intensive behavioural intervention (i.e., discrete trial instruction)[16]. In this study, we examined the same intervention to teach spontaneous responses to a child with Down syndrome.

Max, a 3 year 9 month old boy with Down syndrome, participated in this study. At the time, Max's expressive and receptive language scores fell between one half and one standard deviation below the mean on the Preschool Language Scale Third edition[17]. On the Goldman-Fristoe Test of Articulation[18], Max performed at the 1st percentile. On the Learning Accomplishment Profile-Diagnostic Standardized Assessment (LAP-DO)[19] Max performed at the 21st percentile for language, 85th percentile for cognitive, 13th percentile for fine motor, and 27th percentile for gross motor domains. Max used one to two word utterances to signify possession (e.g., "Mine"), desires (e.g., "I want"), greetings (e.g., "Hi"), and protests (e.g., "No"). He was able to identify pictures of common objects, animals, and characters (e.g., ElmoTM), respond to questions (e.g., "Where is it?"), and followed simple directions. In his preschool, Max rarely interacted spontaneously, depending instead on teacher questions (e.g., "Max, what would you like?") or directives (e.g., "Max Say, 'I want'.") to verbalise.

Max's educational programme consisted of 2.5 hours of intensive intervention each day in addition to 4 hours of participation in an integrated preschool class (6 children with disabilities and 6 typically developing children) in preparation for placement in his community preschool. Intervention occurred in a partitioned area within the classroom where Max received intensive intervention. Max's teacher (a certified special educator) and teacher's assistant, who were trained in applied behaviour analysis, implemented the intervention procedures.

Identification of communicative targets and materials

Based on observations of typically developing preschoolers, the authors generated a list of potential controlling stimuli that were not vocal in nature (i.e., did not contain explicit spoken utterances) and corresponding communicative responses. Max's parents selected three appropriate targets: saying "Bless you" when someone sneezed, "Uh oh" when someone dropped something, and "Coming" when someone gestured "come here" by curving their index finger. Items commonly found in the preschool (e.g., crayon or book) were used to teach saying "Uh oh." Different materials (e.g., toy ) were used for the assessment of generalisation.

A correct response was an unprompted verbal utterance (i.e., saying "Bless you," "Uh oh," or "Coming") emitted within 5 seconds of the presentation of the discriminative stimulus (SD) (i.e., someone sneezing, dropping something, or gesturing "come here").

A multiple baseline design across three communicative responses was utilised. Generalisation probes were conducted with novel people in novel settings with novel materials.

During baseline, the interventionist presented the SD, waited 5 seconds, and then terminated the opportunity in the absence of feedback, regardless of a correct, incorrect, or no response. Baseline opportunities (5 opportunities per session per day) were presented between other instructional programmes or while Max was engaged in an activity (e.g., blowing bubbles).

One generalisation probe opportunity for each response was conducted each week by interventionists (not involved in this intervention) within Max's integrated classroom or in other areas in the school (e.g., gym, hallway) with novel materials (when relevant).

Figure 1 illustrates Max's performance across the three responses during baseline, intervention, and generalisation probes. During baseline, Max did not emit any target responses (0%). Max reached mastery criterion (i.e., performed at or above 80% across two consecutive sessions, days, and interventionists), indicated by a blue dotted vertical line in Figure 1, across all three responses (3 sessions for "Bless you," 8 for "Uh oh," and 14 for "Coming"). Max continued to demonstrate all three responses following mastery and generalised across stimuli. 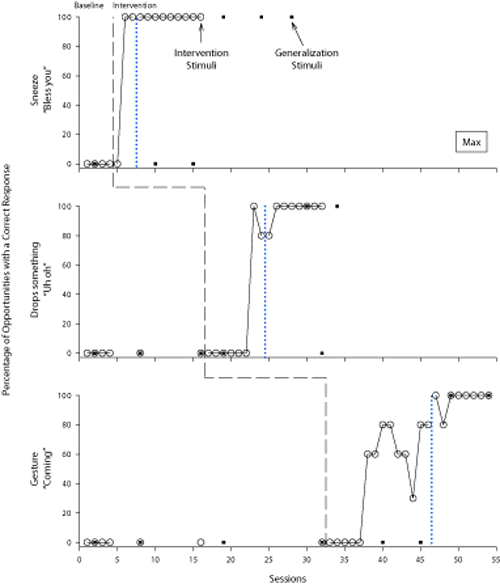 Figure 1 | Percentage of opportunities with a correct response for Max across three communicative responses and performance during generalisation probes. Mastery (i.e., performance at or above 80% across two consecutive sessions, days, and interventionists) is indicated by the blue dotted vertical line.

Because of significant impairments in expressive language among children with Down syndrome, identification of effective intervention strategies is imperative. This study supports the use of intensive intervention to address deficits in spontaneous use of language. We hypothesise that, in many instances, children with Down syndrome refrain from spontaneously communicating due to not having been taught specific responses. Although it is not possible to predict all stimuli to which a child will be exposed, caregivers can identify those highly likely to occur, as well as those particularly relevant for a child, and implement specific intervention.

The spontaneous utterances taught within this study were acquired relatively quickly which may be due to numerous teaching opportunities within close temporal proximity, characteristic of discrete trial instruction. Others have utilised more naturalistic teaching procedures (e.g. Ref.14), demonstrating advantages to both contexts of instruction. Discrete trial instruction allows for multiple teaching opportunities in a relatively short period of time with the use of powerful reinforcers (albeit not necessarily related to the target response). Naturalistic instruction involves the use of naturally reinforcing stimuli and increased likelihood of generalisation. However, in research on spontaneity in children with autism, a greater number of teaching opportunities were required for acquisition within naturalistic contexts[13] than within intensive intervention contexts (e.g. Ref.6). In evaluating the relative effectiveness of intensive versus naturalistic interventions, it is worth considering not only the skill to be addressed, but the immediacy with which the child must acquire the skill. Some skills, specifically impaired in children with Down syndrome (e.g., expressive language), may be more conducive to intensive intervention. When a child needs to acquire a skill within a short period of time, a more intensive approach to instruction may be warranted. The comparative effects of intensive and naturalistic intervention for children with Down syndrome remain to be demonstrated.

Problems with generalisation have also been noted when skills are acquired within intensive intervention contexts, however, Max generalised the responses across stimuli. Anecdotally, following Max's acquisition of the "Bless you" response, his father also reported Max using the social nicety at home. We hypothesise that generalisation occurred as a result of Max's ability to recruit natural contingencies of reinforcement across stimuli. As children with Down syndrome encounter potentially socially reinforcing situations, they may not have acquired relevant language forms prohibiting them from recruiting natural social reinforcement. As demonstrated in this study, once acquired, these forms were displayed across environmental stimuli.

Three additional issues warrant future examination. First, in this study responses reflected a range of communicative functions, including a social nicety ("Bless you"), comment ("Uh oh"), and confirmation of a directive ("Coming"). It is important to assess the full range of communicative functions to determine those that are impaired in individual children and then teach each so that children with Down syndrome can interact effectively. Second, because articulation is an area of difficulty for children with Down syndrome[5], increased opportunities to practice communicative targets may enhance performance. In fact, prior to this study, two responses (i.e., "Bless you" and "Coming") were taught to Max through verbal imitation practice. Third, finer discriminations on the part of the child (e.g., when particular responses should and should not be emitted, that is, conditional use of communicative responses)[21,22] should be assessed and directly taught if necessary.

We thank Developmental Disabilities Institute for the dedication of resources to this project. We also thank our participant, his parents, and teachers who devoted their time and effort, as well as Jillian Bauza, a Stony Brook student, who assisted with data collection.