However, memory training may be about to become more popular as recent work with both children with Down syndrome and non-disabled children has shown positive effects. Francis Conners and colleagues recently reported small but positive gains from a parent supported training programme[2]. Twenty children with Down syndrome aged 6-14 years took part in the study and 16 completed the training schedules therefore the findings are reported for these 16 children. 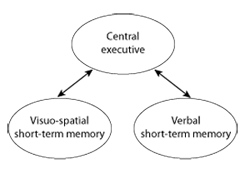 Parents were trained to carry out the intervention programmes with their children. Parents were given training at the start of the study and supported by weekly telephone calls during the training periods. The verbal memory training was delivered entirely in an auditory/verbal mode - the children had to listen to digits spoken and then to say them, with the number of digits in the lists to be recalled increasing as children succeeded at a list length (e.g. 2 digits, then 3 digits, then 4 and 5 for some children). There were no visual materials used to support their learning as in some previous training studies[3,4]. This was an ambitious project as the tasks were really quite challenging but the aim was to really focus on trying to improve listening memory directly.

In order to be sure that any gain on the verbal training programme was specific to the training, an alternative intervention using visual activities was used for comparison. The children were put into 2 groups and one group began with verbal memory training, the other with visual activities. The training sessions for each intervention took place for 10 minutes, 5 times each week for 3 months. Progress was audio-taped and tapes plus score sheets mailed to the research team weekly. After 3 months, the groups changed to the other activity and after another 3 months went back to the first activity programme for a further 3 months.

Working memory delays are also seen in children within the non-disabled population in regular classrooms, and Sue Gathercole and colleagues have carried out a number of studies with these children in recent years (see ref 5). They have also been investigating the effectiveness of memory training and report positive results of using computer training programmes with children with ADHD and with children with poor working memory (see ref 5). This team have used Robomemo, produced by CogMed[6], and children work on this daily. The author and colleagues have had positive results in a small pilot study using the Mastering Memory software[7,8] with children with Down syndrome of primary school age.

Clearly there is a need for further research into memory training which evaluates different approaches to training and also follows up post-intervention to see if benefits of training last. In our previous work, we found an interaction between classroom settings, reading progress over time and lasting gains from memory training games. Specifically, the children in mainstream classrooms who were in daily reading instruction gained from memory training and continued to improve their short-term memory skills over time, while those in special education classrooms showed equally good gains at the end of the memory training period but these gains disappeared over the next 18 months[9].