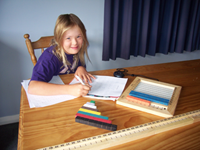 We are amazed to see how well our 10 year old daughter with Down syndrome is doing with her mathematics. Yesterday, when her dad came home, Katrina was able to tell him why 5/4 and 9/8 were improper fractions and she could sit down with her Stern fraction pieces and work out what they were as mixed numbers (1¼ and 1⅛). Looking back, it's very interesting to see what the steps were that helped her to arrive at this point. Like the bike riding[1] it seemed to be a distant and impossible goal for a long time (years) and then suddenly it all seemed to come together.

Many years of practising mathematical skills such as addition, subtraction, multiplication and division have helped Katrina reach the stage that processes such as long multiplication and long subtraction are becoming so automatic that Katrina doesn't even have to consciously think about them. We believe that in this way the processing power that is available to Katrina can be concentrated on other aspects of maths such as problem solving. As an analogy, it is easier to understand the meaning of text if you don't have to sound out the words while you are reading.

We have lived a transient life and in quite a few of the schools we have been to, teachers have commented that Katrina works harder and more consistently than any other child in the class. We think a lot of that can be traced back to the habits and expectations set by pre-school early education classes attended at The Sarah Duffen Centre and by Portage services. Katrina has never really known any different and for the most part she does seem happy to sit down and finish her set tasks, particularly if she feels she is successful. These good learning habits have been invaluable.

A programme for learning number concepts that is based on reasoning and insight into mathematical relationships, rather than rote learning and counting.

In 2003, when Katrina was 7, we started Kumon again. This time it was far more successful because Katrina had developed a lot of confidence using the Numicon templates to support her number bonds. We were very lucky that we had Marie Gibb's Andover Kumon class nearby. Marie is very dedicated to all her pupils and also very flexible and supportive. I think Katrina enjoyed going along to Kumon classes - certainly she enjoyed the fabulous Kumon reward days, when the children could exchange their earned Kumon stickers for sweets. Kumon practice on number bonds to 10, then eventually to 20, continued every day for years. When we left the UK, Marie allowed us to continue by correspondence still with quite detailed support. (Marie even posted the sweets on the reward days!) Looking back, Katrina was doing at least 100 number bonds every day for about 3 years. Even in Marie's Kumon classes, Numicon supported each new stage of progress until Katrina developed the confidence to succeed without the props. As with Numicon or Stern Maths, a key factor in Kumon was the structure it provided, making gradual steps forward by consolidating from a baseline level where Katrina could be successful. Most of all it gave us an appreciation of the progress that can be made when maths is practised for a short amount of time every day. At every stage the biggest single obstacle has been when Katrina will not try because she feels something is too difficult for her. The structure also gave us the confidence to patiently persevere. 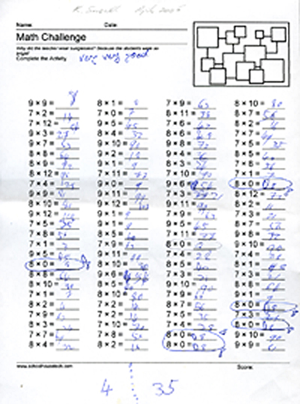 We continued by correspondence with Marie Gibb right up until 2005. We could no longer afford Kumon, but with the very strong foundation in the principles of Kumon and the established daily routines for practice, it was a successful transition when Katrina's mum found several web sites which allowed us to start printing off our own series of worksheets.[2,3]

All last year Katrina practised several hundred maths examples every day before breakfast in order to allow her to pass the weekly maths tests at school (addition, subtraction, multiplication and division). To pass each level and move on to the next, the children had to be able to answer 60 questions correctly in 4 minutes. Because of her daily practice, Katrina managed relatively well and was able to move on to a new level most weeks. Kumon principles insist on improving your personal times, and seeing her 'time score' remains an important motivation and reward - as does the declaration of 'now 100%' after completing corrections (no matter how many corrections there are). On the example work sheets you can see the times that Katrina has recorded for each page, 4 minutes 35 seconds, 3:06 etc. This daily practice has led to the stage where Katrina is now very confident (and very quick) with multiplication and division up to the 12 times tables and addition and subtraction number bonds up to 20. 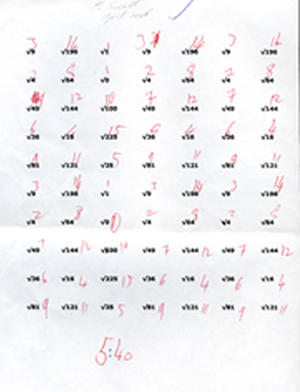