The National Down Syndrome Cytogenetic Register (NDSCR) holds data on prenatally and postnatally diagnosed cases of Down syndrome occurring in England and Wales from 1st January 1989 onwards. The methods of data collection and processing have been described previously ( Mutton et al., 1991 ; Mutton et al., 1993 ). The information is derived from all clinical cytogenetic laboratories in England and Wales, who are requested to send a completed form for each diagnosis of trisomy 21 and its variants, including data on outcome of pregnancy, prenatal or postnatal diagnosis, age of mother at birth of baby and birth year (estimated for terminations), amongst other variables. The ascertainment of livebirths has been estimated to be over 94% complete ( Mutton et al., 1991 ; Mutton et al., 1993 ).

Data on the total number of livebirths in England and Wales from 1989 to 2003 by single year of maternal age has been provided by the Office for National Statistics (ONS) (Tables 3.2, Birth Statistics Series FM1), and relates to a total of around 9.7 million livebirths.

Maternal age is available for 96% of the registered Down syndrome pregnancies and 92% of the livebirths. Missing maternal ages are assigned according to the observed probability distribution within each birth year and pre/postnatal diagnosis category.

The data will be used to demonstrate changes between 1989 and 2003 in maternal age distribution, mean maternal age and the percentage of babies born to women aged 35 and over. 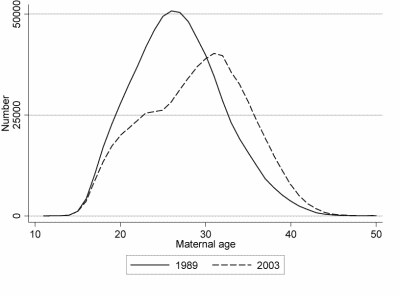 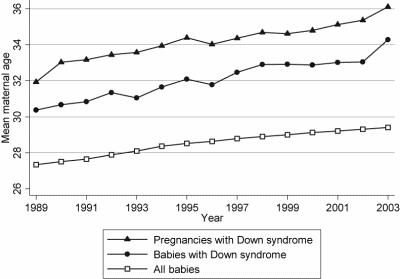 Figure 2 | Mean maternal age for all births, Down syndrome pregnancies and Down syndrome livebirths against year of birth (Source: ONS and NDSCR) 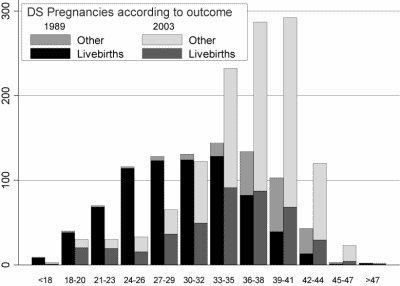 Figure 3 | Number of Down syndrome pregnancies and livebirths in 1989 and 2003 by 3-yearly categories of maternal age (Source: NDSCR) 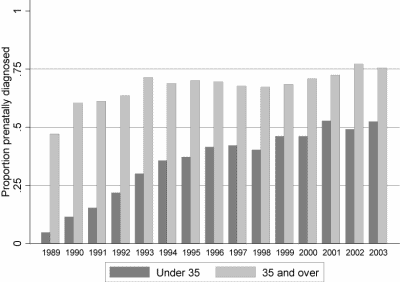 Figure 4 | Proportion of pregnancies with Down syndrome diagnosed prenatally annually from 1989 to 2003 by maternal age category (Source: NDSCR)

The distribution of all maternal ages in England and Wales in 1989 and in 2003 is shown in Figure 1 . Maternal age has increased over time, with greater numbers of babies being born to older mothers. Nationally the mean maternal age increased from 27 to 29 years ( Figure 2 ) and the percentage of all live babies born to mothers aged 35 and over increased from 9% in 1989 to 19% in 2003 ( Table 1 ).

Data collection for the NDSCR is funded by the National Screening Committee. We thank Haiyan Wu for maintaining the register and Eva Alberman for her helpful comments on this manuscript.