One of the features associated with Down syndrome is poor motor coordination or clumsiness ( Frith & Frith, 1974 ). Although clumsiness is a broad term that is not well defined ( Latash, 2000 ), there are certain motor features that give an overall impression of poor coordination or clumsiness. These include a variable and delayed pattern of motor development, deficits in tasks involving balance, speed and visuo-motor control ( Connolly & Michael, 1986 ; Harris, 1983 ), bilateral coordination ( Jobling & Mon-Williams, 2000 ), and hypotonia ( Anson, 1992 ). Detailed analyses of movements have shown that individuals with Down syndrome demonstrate longer reaction times in comparison with neurologically typical individuals ( Blais & Kerr, 1986 ; Henderson, Illingworth & Allen, 1991 ), longer overall movement times ( Hodges, Cunningham, Lyons, Kerr & Elliott, 1995 ), and increased variability in performance ( Welsh & Elliot, 2000 ).

A number of hypotheses have been posed to explain the motor behaviour of individuals with Down syndrome. Frith and Frith (1974) attributed motor clumsiness to a general deficit in developing motor programs. Others have attributed these changes to more specific impairments of somatosensory function ( Chiarenza & Stagi, 2000 ), impaired decision making processes ( Almeida, Corcos & Hasan, 2000 ) or impairments in the timing of motor sequences ( Henderson et al., 1991 ; Chiarenza & Stagi, 2000 ). To date, the study of motor behaviour in individuals with Down syndrome has been focused largely on evaluation of pointing movements to a target, tapping movements, or single button or key presses. Few studies have examined how individuals with Down syndrome learn and perform continuous movements that require a specific sequence of movements. Elliot, Weeks and Gray (1990) found that verbal-motor problems are more pronounced when oral and manual gestures involve two and three movement components. Jobling and Mon-Williams (2000) found poor performance on tasks that required asymmetrical activities or tasks that required complex sequences of movement. These findings raise a number of interesting issues. First, is poor performance related to difficulties in coordinating and combining separate movement components, or as Almeida, Marconi, et al. (2000) have suggested, are individuals with Down syndrome simply unable to maintain a certain level of concentration required to complete the task?

A second issue involves the role of visual information in coordinating movements in individuals with Down syndrome. Few studies have directly examined how vision of the moving limb influences the organisation of movement. It is well known that in order to reach to a visual target, information about the extent and direction of the movement must be transformed into a plan expressing changes in joint angles and torques for displacing the hand through its intended hand trajectory ( Flanders & Herrmann, 1992 ). This transformation from extrinsic to intrinsic coordinates necessitates learning the dynamic properties of the limb ( Goodbody & Wolpert, 1998 ; Shadmehr & Mussa-Ivaldi, 1994 ). While it is generally accepted that contextual information about the state and configuration of the limb is critical for developing an internal representation of limb dynamics ( Ghez, Gordon & Ghilardi, 1995 ; Ghez & Sainburg, 1995 ), the role of visual and proprioceptive (i.e. awareness of limb position) information in learning and maintaining an internal model of limb dynamics is unclear. 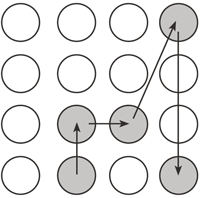 Reaction time was measured from the onset of the second tone to the start of first button release. Movement time was measured from the release of the first button to the depression of the last button. Data from correct trials only were analysed. A 2 (group) x 2 (feedback condition) mixed ANOVA with repeated measures was used to analyse the results. 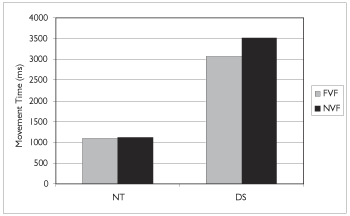 In this study we first examined the performance of a sequence of movements in adults with Down syndrome. Our results indicated that, with appropriate feedback, individuals with Down syndrome were able to improve their movement times under all conditions. This finding is interesting in that it contradicts some reports that individuals with Down syndrome are often unable to complete tasks even with verbal feedback/encouragement. Frith and Frith (1974) for example, reported that children with Down syndrome often stopped before the end of the task and that verbal prompting led to individuals applying more pressure during a finger tapping task rather than improving movement speed. This highlights the importance of providing appropriate, goal-orientated feedback. In our study verbal feedback and encouragement was based on giving knowledge of results of the overall movement time and verbal encouragement to improve this score in a "game" like environment. This obviously helped to maintain the motivation of individuals. If the goal is not well understood valid assumptions cannot be made about the resulting observed behaviour. Latash and Corcos (1991) have shown also that adults with Down syndrome show improvements in tasks involving single joint movements as they became more confident in their abilities. We have now shown that such improvements can also occur in tasks involving multi-joint movement in a more complex sequence of movements.