Work stress and people with Down syndrome and dementia

In the learning disabilities services staff are the most expensive resource. Emerson et al. (1999) suggested that in dispersed housing schemes staff account for 72% of expenditure. A number of factors have been shown to influence staff well-being including support ( Rose, 1999 ), confidence ( Sistler & Washington, 1999 ), gender of caregivers ( Sharpley, Bitsika & Efremidis, 1997 ) and coping strategies ( Wright, Lund, Caserta & Pratt, 1991 ). There are clearly many other factors (for a review see Rose, 1997 ). Although all of these factors have been investigated in the literature with regard to general stress experienced by those caring for people with learning disabilities, there is a dearth of literature concerning the well-being of caregivers specifically caring for people with Down syndrome and dementia.

Down syndrome and dementia

"There is considerable evidence that adults with Down syndrome are at increased risk of developing acquired cognitive impairments consistent with dementia as they age" ( Oliver, 1998 ). Oliver found that during the four-year study period 70% of those over the age of 50 acquired cognitive impairments. Thase, Smeltzer and Maloon (1982) suggested that there is a clear deterioration in neuro-psychiatric status with advancing age in people with Down syndrome when compared to control participants. They concluded that overall individuals with Down syndrome were twice as likely to have at least one sign or symptom of dementia and twelve times more likely to have a full syndrome of dementia.

Clients possess a number of attributes, which may impact on the well-being care staff experience. The problems highlighted by caregivers and service users clearly indicates that it is the area of mental health, behavioural problems and basic daily living skills that challenge carers ( Oliver, 1998 ). Oliver stated that of the carers that were experiencing problems and needed help, 80% indicated that help was needed in the area of difficult behaviour and mental health. Oliver, Crayton, Holland and Hall (2000) reported that difficulty for caregivers was associated with cognitive and behavioural problems in service users. One of the many characteristics facing care staff within learning disabilities services is that of challenging behaviour.

It has been argued that the most common source of stress for those caring for individuals with challenging behaviour was the absence of an effective way to deal with challenging behaviour and the unpredictability of such behaviour ( Bromly & Emerson, 1995 ). Hinchliffe et al. (1992) investigated the use of psychological and pharmacological methods of managing behaviour reported that there was an association between clinically significant changes in service users' behaviour and a fall in caregiver General Health Questionnaire (GHQ) score. This suggested that a reduction in challenging behaviour exhibited by the client may reduce the burden experienced by staff. Closer investigation of this study reveals a clinically significant change in client's behaviour and a reduction in caregiver's GHQ score was only seen in three cases (out of sixteen). The finding therefore could have been the result of characteristics possessed by the caregivers rather than attributable to the intervention used. It would therefore be unwise to generalise from these observations to those people with behavioural difficulties as a whole without testing a larger population first. Although some support for the findings is provided by Jenkins et al. (1997) , the use of different measurements for both resident characteristics and staff well-being may lessen the comparability of the results. In contrast Chung, Corbett and Cumella (1996) found that although burnout was high, staff had a positive outlook towards working with clients, with burnout being correlated with management issues (e.g. hours worked, training received) rather than clients' behaviour. This finding was duplicated by Chung and Corbett (1998) in a later study, and supported by Rose (1997) in a review of the literature.

In light of increasing concerns over the well-being of caregivers, and the observation that care staff who work with people with Down syndrome and dementia can appear to be more stressed than those who do not (Oliver, 1998) , it has been proposed that staff perceptions of challenging behaviour, as exhibited by people with Down syndrome and dementia will be examined in relation to the impact such perceptions may have on psychological well-being of the caregiver.

Selection and description of day centres

The Thoughts and Feelings Index

The Thoughts and Feelings Index ( Fletcher, 1989 ) was used to assess psychological well-being. This is a short questionnaire, measuring anxiety and depression levels. The questionnaire consists of eight statements: four comprise the depression subscale, and four comprise the general anxiety subscale. Caregivers were asked to indicate how often each of the eight statements applied to them by use of a four-point scale, ranging from never to very frequently/often. The maximum score on each of the two scales is sixteen. A score of above 12 is of clinical significance.

The General Health Questionnaire 12 ( Goldberg, 1978 ), concentrates on broader components of psychiatric morbidity, including particularly anxiety and depression. The questionnaire is made up of 12 statements asking participants to compare their recent medical complaints to their usual state on a 4-point scale of severity. Some of these items are positive and some negative. Scores of four and above (when using the GHO-12 scoring system) are of clinical significance, with higher scores indicating decreased well-being.

The general characteristics of the sample 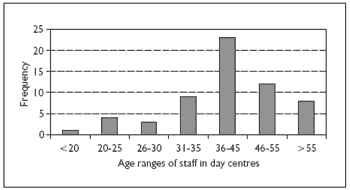 Those specifically working with Down syndrome and Dementia service users 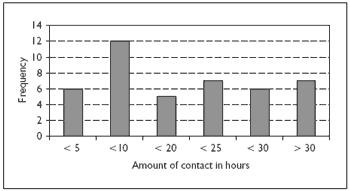 Figure 2 . Amount of contact care staff had with service users with Down syndrome and dementia

All care staff were asked if they worked with another client with learning disabilities that exhibited challenging behaviour but who did not have Down syndrome and dementia, and 54 of the 60 (90%) staff who filled in the questionnaire did. As with the previous section, a Pearsons correlation was conducted between, how challenging staff perceived the service user to be and the psychological well-being measures of Anxiety, Depression, and the GHQ-12. Perceived level of challenging behaviour in service users with learning disabilities was significantly correlated with Depression (r = .30; p<.05), and the GHQ-12 (r = .35; p < .01), but not with Anxiety (r = .10. n.s).

The analysis of the difference between those caring for people with Down syndrome and dementia and those caring for people with non-specified learning disabilities suggests that the well-being experienced by both these groups is similar irrespective of the client group they are caring for. When looking at the Down syndrome group specifically in relation to the presence or absence of challenging behaviour, no significant difference was observed in carers' well-being. This suggests that the mere presence of challenging behaviour is not mediating the well-being of care staff.

The aim of the present study was to try to explore whether perceived challenge presented by service users with Down syndrome and dementia had an impact on the psychological well-being of care staff. The above findings suggest however that when behavioural difficulties are present, it is the perceived degree of these behavioural difficulties that is important in mediating the psychological well-being of care staff in this cohort, whether service users have Down syndrome and dementia or not. The findings would imply that challenging behaviour prevention and reduction might not only be useful for service users, but also for staff well-being. This finding is supported by the literature, in that the degree of challenging behaviour is a predictor of psychological well-being in staff (e.g. Jenkins et al., 1997 , Hinchliffe et al., 1992 ).

There are a number of reasons why when specifically looking at caregivers of people with Down syndrome and dementia compared to other service users with learning disabilities no significant results were observed. The first is that as service users cognitive abilities decline and behavioural problems increase, they are less likely to attend day centres. Oliver et al. (2000) reported that individuals experiencing cognitive decline were less likely to receive day services. This suggests that although service users with Down syndrome and dementia will be present in this sample, they may be less distressed, and may show less complex problems than those in residential or nursing care. Secondly the organisation of day centres is such that there is often considerable mobility between groups. Care staff are often involved with different groups and activities on a daily basis, and the service users themselves may only be present for a set number of days a week, or involved in activities which removes them from the centre, or the care of the staff member. Finally, researchers have argued (e.g. Chung et al., 1996) that a positive attitude to working with such service users reduces the impact of challenging behaviour on psychological well-being and that psychological well-being is more associated with management issues (a factor not assessed in this study) than clients' behaviour.

There are some limitations of this study, during the data collection period day centres in the sample area were under considerable organisational uncertainty, the nature of these changes were undisclosed, but likely to have had an effect on the stress scores of many participants. It should also be acknowledged that the focus of the study was on the effects of a specific factor, namely perceived challenging behaviour, on the well-being of care staff working in day centres, the problem however is that well-being is complex. There was no investigation of other factors either internal or external to the day centres that could have had an impact on care staff well-being. This is an important consideration, as outside influences (such as home environment) will undoubtedly have an impact on individual well-being.

There are a number of areas that require future research and day care for service users with Down syndrome and dementia is a neglected area of investigation. The present study has focused on but one of the many factors associated with well-being. Further research in this area should therefore look at other factors which mediate the service user-caregiver interaction, for example how supported staff feel they are by managers, or the conflicting demands of work and home, with an aim to identify which are important in mediating staff well-being. Identification of these factors will enable interventions within day centres to have enhanced effectiveness. There is also a need to assess well-being longitudinally, as service users with Down syndrome and dementia experience greater cognitive deterioration and increased behavioural problems, how will caregiver well-being be effected? Such research will clarify the stages at which intervention programmes are most needed, as service users with Down syndrome and dementia pass through different levels of care.

The present study was conducted as part of a BSc (Hons) Psychology degree conducted at the University of Birmingham. I would like to thank all caregivers that took part in the study, Dr John Rose for his supervision, as well as Professor Chris Oliver, Dr Sunny Kalsy, and Paul Dolan for their help on the project.