There is an ongoing effort to identify individual genes on Chromosome 21 that may independently each subserve one of the many diverse symptoms that constitute the Down syndrome. In contrast, the interferon system points to a multigene, multilocus, system distributed across Chromosome 21 that can explain each of the individual symptoms of the Down syndrome as a consequence of the concerted action of multiple genes which share in common a role in interferon action. To date, at least ten such genes have been identified on Chromosome 21. This number is likely to grow as new genes are identified, and their role in interferon action is uncovered. The recently discovered human SIM2 gene is presented here as an example. Its Intron 3 sequence reveals a clustering of interferon response elements that suggests an unexpected role for this gene in interferon action. We also present here a comparative analysis of the complex of untoward side effects of interferon therapy that reveals a striking similarity to the spectrum of symptoms that make up the Down syndrome. Taken together, these gene mapping and clinical observations suggest the possibility that the diverse symptoms of the Down syndrome could have a surprisingly non-diverse underlying biochemistry.

Maroun, Heffernan, and Hallam . (1998) The Untoward Side Effects of Interferon Therapy Correlate Well with the Spectrum of Symptoms that Make up the Down Syndrome. Down Syndrome Research and Practice , 5(3), 143-147. doi:10.3104/hypotheses.91

It has been known for many years that cells from individuals with Down syndrome are excessively sensitive to interferon effects ( Tan et al., 1974 ). Two observations suggest that this interferon hypersensitivity could underlie many Down syndrome pathologies:

Numerous genes involved in interferon action are located in the region of human chromosome 21 responsible for most of the Down syndrome pathologies.

The "distal" half of chromosome 21 contains a large cluster of genes that direct the synthesis of interferon receptors and receptor components. These genes control sensitivity to each of the various types of interferons. In addition, the same "Down Syndrome Region" (DSR) contains genes whose activities are controlled by the interferons and at least one gene that is involved in this control mechanism (ETS-2, a "transcription factor"). These genes, along with their potential role in brain function, have been described previously ( Maroun, 1996 ).

Other genes mapped to Chromosome 21 and thought to be important in brain function are also candidate interferon responsive genes. For example, we have now found an unusual cluster of interferon response elements in Intron 3 of the human SIM2 gene ( Figure 1 ). 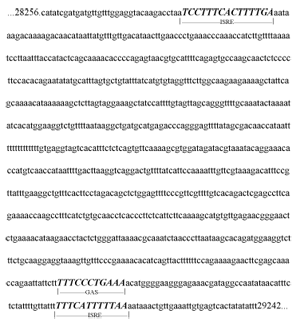 A clear correlation is observed for many of the pathologies seen in a person with Down syndrome with the side effects seen in patients undergoing interferon therapy.

One of the most compelling arguments for the involvement of interferon action in the Down syndrome is based on a remarkable similarity of the spectrum of symptoms seen in Down syndrome and with those seen in patients who have been treated with interferon. Although the effects of interferon on growth were predictable given interferon's anticellular effects, the brain, heart and immune system function effects are surprising in their similarity to the pathology seen in the Down syndrome. It is possible that interferon's ability to slow cell growth may subserve each of these pathologies at their most fundamental level.

This comparison is presented in tabular form in Table 1 along with pertinent references.

Anti-interferons can reverse or prevent the untoward effects of the interferons.

observations including the extension of these observations to the animal model for Down syndrome ( Maroun, 1995 ). Injection of anti-interferon immunoglobins into mothers carrying trisomy 16 mouse fetuses resulted in significant return-to-normal values for fetal growth, eye closure, and back curvature ( Maroun, 1995 ). In contrast to the unpredictable growth of the untreated trisomy fetuses, the growth of the treated trisomy fetuses was essentially keeping pace with that of their euploid littermates ( Figure 2 ). 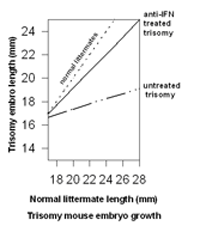 Figure 2 . Improvement in the growth of trisomic mouse embryos treated with anti-IFN antibodies. Modified from Maroun, 1995.

In these experiments the reduction in interferon bioactivity was observed to be well tolerated. This is consistent with what is observed with "Knockout" mice whose genes for interferon receptors have been rendered inactive ( Hwang et al., 1995 ). The same is true in humans who carry a mutation in their interferon receptor genes ( Newport et al., 1996 ) ( Jouanguy et al., 1996 ). Patients who have circulating anti-interferon antibodies as a consequence of interferon therapy show the expected decrease in the efficacy of further interferon treatment but no other untoward effects have yet been observed ( Quesada et al., 1986 ). Taken together, the observations discussed here suggest that the in vivo neutralization of interferon in individuals with Down syndrome could be both safe and potentially beneficial.

This project was supported in part by the American Heart Association and the Excellence in Academic Medicine programme of Southern Illinois University School of Medicine.