Trisomy 21 is the most common aneuploidy occurring as a sporadic event with a frequency of 1 in 600 to 800 live births (McKusick, 1994; Hook, Cross & Schrenemacheis, 1983). Down syndrome due to regular trisomy 21 in two or more sibs of healthy, normal young parents (< 30 years) occurs rarely, considering the recurrence trisomy 21 in livebirths and prenatal diagnosis data to be 1 to 2 percent for young mothers (Mikkelsen, 1971; Mikkelsen, 1989). However, there is no estimate for multiple recurrence of trisomy 21 or other aneuploidy in young parents, though there are several reports suggesting that the probability is greater than expected. The etiology of familial non-disjunction is not well understood. There are several possible explanations for the familial occurrence of aneuploidy. The first of these is of cryptic parental mosaicism (Harries, Beyleiter, Chamberlin, Hankins & Mogenis, 1982; Parke, Gross, Pixley & Deal, 1980; Richards, 1974; Sachs, Joshoda, Los, Pijpien & Wladmiroff, 1990; Tuck, Bennet, & Vamla, 1984). The other possibility is "genetic predisposition", as suggested by Alfi et al (1980), and others (Bell & Gripps, 1974; Kwiterovich, Cross & McKusick, 1966; Devoto, et al, 1985). Whatever being the cause, counselling young parents having two or more sibs with trisomy 21 poses difficulties.

Three unrelated Kuwaiti families each with 3 Down syndrome sibs were ascertained, clinically and cytogenetically. The clinical history of the three families are presented in Table 1 and Figures 1-3. 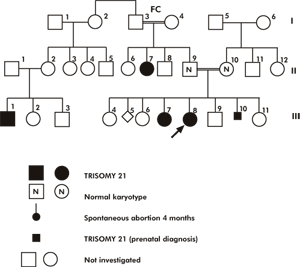 The proband is a female infant, the product of the 4th pregnancy to consanguineous (less than first cousin) phenotypically normal parents. At birth, the parental ages were 23 and 28 years old mother and father respectively. Preconceptional and 1st trimester histories were non-contributory. At birth she was of average weight and showed the clinical stigmata of Down syndrome. Pedigree (Figure 1) study revealed that the proband has two elder phenotypically normal female sibs, two younger phenotypically normal sibs (brother and sister) and one elder female sib with Down syndrome and one early spontaneous abortion. Four years later the proband's mother conceived and prenatal diagnosis using transabdominal microvillus sampling technique revealed regular Trisomy 21 fetus, subsequently terminated.

The proband, a Kuwaiti male neonate, the result of the 3rd pregnancy to non consanguineous phenotypically normal parents. At birth the parental ages were 23 and 28 years for both mother and father. Preconception, first and second trimester histories were irrelevant and the pregnancy concluded at term with spontaneous vaginal delivery and cephalic presentation. On examination at birth; weight 2.450 kg, height 49cm and occipito frontal circumference was 33cm. He showed many stigmata of Down syndrome; upward slanting of palpebral fissures, epicanthic folds, depressed nasal bridge small ears, high arched palate, small mouth, webbed neck, bilateral clinodactyly, gaping between 1st and 2nd toes, hypotonia and high imperforate anus. Neither organomegaly nor congenital heart were detected. The testes were undescended. Pedigree (Figure 3) study revealed that the proband had two elder male sibs, one of them was similarly affected but without intestinal malformation. Recently on 16.11.96 the proband's mother delivered male child who also showed the clinical features of Down syndrome.

The presence of two or more sibs affected with a chromosome abnormality may suggest the existence of a familial factor leading to errors in chromosome segregation in families with multiple aneuploid members (Ford, et al, 1959; Lanman, Shlarin, Cooper & Hirschhorn, 1960). Therman, Palu, Smith & Demers (1961) postulated a genetic susceptibility to nondisjunction. They believed that mosaicism in man was under genetic control as has been shown in maize and drosophila. However Hamerton et al (1961) pointed out that the presence of trisomy 21 in multiple sibs may be due to either mosaicism in one of the parents or an inherited predisposition. Cytogenetically parental translocation, parental mosaicism, and/or structural rearrangements are the underlying causes for recurrent aneuploidy in a family. The prevalence of chromosome 21 mosaicism in a random normal population is not known in most newborn surveys. Large number of cells are not scored to exclude low grade mosaicism. Very few authors agree with the existence of single gene hypothesis (Alfi, et al, 1980, Bakker, Carpenter, Esposito, Esposito & Sandler, 1976; Puri, Khanna, Bhurga & Balakrishnan, 1977). However other authors reported no evidence to support the suggestion of an inbreeding effect (Kwiterovitch, et al, 1966; Matsunasa, 1966; Juberg & Davis, 1978; Naguib, 1984; Basaran, et al, 1992, Naguib, Al Awadi, Moussa, Mohammed & Attia, 1992) while Hecht et al (1964) were unable to prove or disprove this suggestion. In the literature very few reports describe Down syndrome in siblings (Table 2). In their reports some authors found microchromosome low grade maternal mosaicism as the underlying cause for recurrent Down syndrome (Nuzzo, et al, 1975; Osuna & Moreno, 1977; Perroni, et al, 1990). On the other hand Bartsch et al (1993) described a Spanish family who had two sibs with dup(21q) Down syndrome whose mother has three different chromosome anomalies; a chromosome 22 with an unusual pericentromeric region that contained alphoid DNA from chromosome 21/13 and chromosome 22, an isochromosome 21p and an isochromosome 21q in a rare second cell line.

Nondisjunction could be possibly attributed to genetic, environmental or combined factors. Theoretically genes predisposing to increased non-disjunction can be classified in several different ways: a) Gene(s) producing non-disjunction of a specific chromosome (e.g. chr.21) b) Gene(s) that can predispose to non-disjunction of different autosome /sex chromosomes in the same individual, or in sibs, due to, parental and/or post zygotic or post-systic non-disjunction "heteroaneuploidy" (Ex: 48, XX, or XY, +21, +18; 48, XXY, +21 46, X, -X, +21). The occurrence of "heteroaneuploidy" would not prove the existance of predisposition gene(s). Such outcome resulting from parental mosaicism has been demonstrated in some families with >2 trisomy 21 sibs. Familial "heteroaneuploidy" is very rare. However, the occurrence of aneuploidy for different chromosomes is better evidence for genetic predisposition although environmental factors could also be invoked as a possible cause. Aminocentesis and livebirth data provide little evidence for a strong "heteroaneuploidy effect" although a weak effect cannot be excluded. Studies in abortions are suggestive of genetic mosaicism in heteroaneuploidy (Nuzzo, et al, 1975).