"You never know your luck in a raffle"…. absolutely true. Both our children, Max (8) and Beth (6) watch Blue Peter on the BBC (Beth's Down syndrome is not a barrier!) and Max saw that there was to be a Party at Buckingham Palace for children to join in celebrations marking the Queen's 80th birthday. 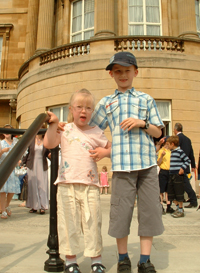 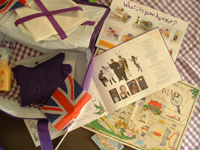 Did Beth enjoy the day? You bet! School had prepared her for the day; "My Queen, my Palace" were repeatedly heard in the days leading into 25/6. On the day a bandsman was very attentive . Beth saw Thomas and Pirate Island - Noddy, TweedleDum, TweedleDee, Postman Pat and Snow White were just some of the many characters mingling in amongst the 3000 guests, in their turn mingling with Hermione and Ron (see picture on next page), Wallace and Gromit, Peter Rabbit, Peter Pan, Robin Hood, Tracy Beaker, the White Rabbit and a walking talking box…..Chitty Chitty Bang Bang, Mary Poppins…… and the Queen herself ("she's tiny!"). Keita managed a photo of the back of her head, quite an achievement given the surging crowd! 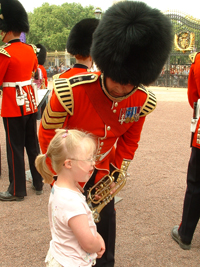