Noises. A clock ticking. Heels walking along the corridor outside. My breathing. Her breathing. Her fingers tapping numbers into a keyboard. All noises. Noises going on before the words that changed my life were uttered.

I lay on the couch, my swollen abdomen covered in gel. I listened to the noises. The clock still ticked. Heels still walked along the corridor outside. I still breathed ….. except my breathing wasn't relaxed any more. It was shallow and fast. I tried to connect with the baby that kicked away inside me. I stroked my abdomen trying to stop my anxiety reaching my unborn child.

The door opened and the stenographer re-entered, followed by someone else, her more senior colleague. The noises continued. Except the tapping at the keyboard was accompanied by murmured discussion, and long silences. And then, the words came again, the words that were still screaming in my head from their first utterance, "I'm so sorry Mrs Hamlyn, there is a problem with your baby". I sat up, my face pale, my breathing laboured. They were kind, but I felt very alone.

"What do you mean?" I managed to utter, "What sort of problem".

They talked me through the problem that existed within the heart of my unborn child. My beloved child that I, and my husband Richard, had already loved and wanted for 24 weeks, and even before then. The words I heard mostly drifted over my head until I heard the phrase "incompatible with life".

That phrase still sends shivers down my spine. "Incompatible with life".

Tears filled my eyes but I refused to give them air. I felt I'd completely lose control if I started crying, and I didn't want to do that now, not here, not alone, amongst strangers. "Is my baby a boy or a girl?" I asked, "I really need to know".

They exchanged glances. A kind hand was laid on my arm "it's a little boy, and he's very poorly". I knew what it was to "want" at that moment. I desperately wanted this boy, not any boy, but this boy. I named him Isaac in my heart. I wanted Isaac to live. I wanted Isaac as a brother for Joshua who was, at that moment, at his cousin's 3rd birthday party.

Suddenly I knew I needed my husband, Richard, beside me. I needed him to be strong for me. I felt so weak. I just stared at the stenographer and her colleague, unable to form any words.

I pulled my mobile phone out of my bag and again stared, this time at the big sign on the wall instructing "mobile phones should be switched off". My gaze returned to the two people looking at me with sympathy. I challenged them with my eyes, refusing to believe I would be made to use a public phone outside with everyone watching. By "everyone" I knew who I meant … all those happy couples in the waiting room just feet frt from me, the other side of the door, happily awaiting their antenatal scan, excitedly making plans, or flicking through baby magazines.

"It's OK" the taller lady said "Take your time and ring, and we will give you some space". I didn't want space, I didn't want to be alone. I wanted noise, and normality. Above all, I wanted hope.

It took a while to locate my husband but some time later he appeared with his mum.

An hour after that we were home, frozen into shock. Looking back on those hours now, I can't really remember much detail. I think my parents came round, I vaguely remember Joshua, then just two, returning from his party and my trying to look and sound normal.

The following day saw Richard and I on the train up to Guys Hospital in London. We took with us friends, Bob and Lois. It's bizarre the things one remembers when looking back at times of trauma. Our friends did a good job getting us through that train journey, taking our mind off the fact that we felt we were rabbits caught in a car headlights, about to be mown down. I recall this bizarre conversation with Bob in a café at London Bridge Station where he informed us that baguettes were often eaten in the war, as soldiers could place them down the side of their trousers!!

All the time since the previous day, the phrase "incompatible with life" still swam round in my head. At last, at Guys Hospital, talking to an amazingly kind and gentle Consultant, Mr John Simpson, we felt we were given a "breathing hole" through which to gulp air from the deep dark tunnel we'd been plunged into the previous day.

Yep, the prognosis wasn't good. Our son did have a massive AVSD with severely compromised valves. But we were given hope. He could have surgery, he may live. My heart leapt, ……….. fleetingly, ………… before it felt that, yet again, the breathing hole that had opened up was firmly clamped shut as the phrase "Down syndrome" entered the equation for the first time.

It was not easy to arrange an amnio. This appeared to be because we had made it clear that, whatever the results, we would not terminate the pregnancy. We were asked many times what then was the point in risking the pregnancy by having one? But the sense of urgency for facts refused to leave me, and we were finally granted our wish.

We returned to Guys Hospital for the amnio, again with our friends. It didn't take long, and as we left Lois later reminded me that the stenographer said to us "go away and enjoy your beautiful baby".

And we did. He was born with Down syndrome about 10 weeks later.

I can't say those weeks between finding out he had Down syndrome and him being born were easy; they were certainly not; in fact if I'm honest they were among the most difficult weeks of my life. I didn&# life. I didn't know whether to be happy or sad; I didn't know how I'd cope; I feared our new son would "spoil" the "normal" life we had. And the fear, deep down in my heart, that I hardly dared verbalise, let alone whisper secretly to myself, was that I would not be able to love my new son.

I read everything I could lay my hands on, devouring facts, statistics, stories of hope, stories of difficulty. I became an expert on Down syndrome in a very short space of time - that was my way of coping. 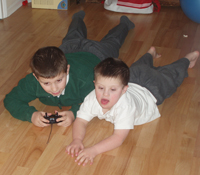 Gosh, all that is five years ago now.

Five years since we first laid eyes on our gorgeous son, Isaac, a name which means "the bringer of much joy".

Five years since he joined our family. Five years since we handed him over to the anaesthetist for open heart surgery, our own hearts filled with dread that he may not pull through such a huge operation at such a tender young age.

Five years, and over 500 medical or developmental appointments later (… yep, there are A LOT of appointments when you have a child who is different in any way!)

Five years since he was born, and now he's at the local primary school surrounded by his friends.

It has been five years of highs and lows; lows that are intense and lonely; and highs that are intoxicating by their joy and their pureness.

We love Isaac with all our hearts, he makes us laugh, he makes us cry, he teases, he jokes, he empathises. He teaches us so much about what is really important in life. He touches so many people in a deeply positive way. Our older son, Joshua, said recently " life wouldn't be nearly so much fun without Isaac". We agree, we wouldn't have him any other way because he's perfect …. just the way he is!!

Sal Hamlyn is a parent from the UK, and is also the author of © Fast Train, Slow Train, published in Down Syndrome News and Update 5(1)