Now that James had left he enjoyed being 'Joe' and not 'James' brother'. James has a huge personality and made himself and his business known to everyone in the school. Joe, however, had grown tired of regular reports from pupils on James' behaviour whether excellent, hilarious, inappropriate or otherwise. 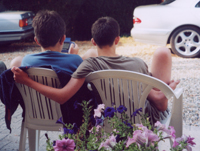