The charity is an internationally recognised organisation, which researches and disseminates information on the development and education of people with Down syndrome. It also provides a wide range of support and advice services including assessments and consultations and helps schools and families with strategies for dealing with behavioural issues. I work at the charity, helping the psychologists with the Early Development Groups, which are fortnightly speech and language groups for pre-school children. The groups are regularly attended by approximately 75 children and their families. 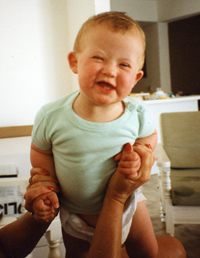 Came home from hospital today. Noticed how strong colours in the house are. Mum made salad. Stared at the wall and cried for ages. Baby not feeding well. Seeing cardiologist at Harefield tomorrow. Maybe he'll die — problem solved.' But, I'm terrified he'll die because I love him so much.

When James was 2, I gave birth to another son, Joe, and the heat was taken out of my obsessive behaviour. I began to get my life back on track and Paul and I started to think about James' future. We had read about some children with Down syndrome going through mainstream education but had no idea whether James would be able to or if any mainstream school would accept him. James developed extremely well, exceeding all expectations placed on him by professionals.

Life was good, we were all happy. James was just a kid at the local primary school. With 20 hours learning support per week, things ran fairly smoothly for him. Some of his behaviour was baffling to the teaching staff as he would hide, or stuff toilet rolls down the toilets but in my view he was no more trouble than other children, he just did different things. I felt so happy, I took a part time job and obtained a qualification in counselling.

When James went into the junior school things began to unravel. In years 4 and 5 he had a teacher who clearly felt that James should be in a special school. James picked up on this and our bright, lively, funny, confident boy became sullen and withdrawn and his behaviour deteriorated fairly dramatically. This change in his behaviour gave the teacher the reason she needed to recommend he move to special school. 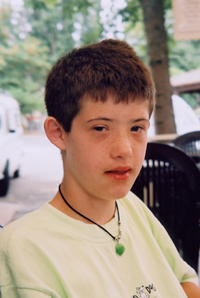 I now work 3 days a week at Down Syndrome Education International supporting the parents of very young children with Down syndrome drawing upon my experience as a mother who pretty much fell apart and was put back together and on the skills I acquired through my counselling qualification. And I like nothing better than to tell some of the parents about James' wit, humour, teenage moods, football fanaticism and huge amounts of love he brings to the family. When he came into our lives I asked "Why me? What have I done to deserve this?" Now I smile to myself and think, "Crikey, what have I done to deserve this?"