Nick is a happy, sociable, fourteen year old boy who has Down's syndrome, a heart murmur (VSD) and Coeliac disease. Although he has very low muscle tone, which affects his fine and gross motor skills, he has thoroughly enjoyed learning to cycle over the past year. This is all the more surprising as he fell off a tricycle when he was five and had rigorously refused to look at, let alone get on, anything with wheels until he met Ben. 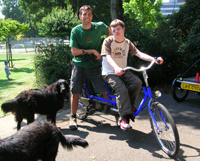 Ben Sherratt is a very rare and special person. He has an academic background in provision and access to leisure for people with special needs, postgraduate study in development education, as well as being qualified as a precision mechanical engineer. He now runs a unique cycle therapy programme in Preston Park, Brighton. It was here that Nick met Ben and his two dogs, Poppy and Fluke.

Bikes were not the only phobia Nick had at this time; he had recently developed a fear of dogs. No one knew quite why. Ben's skills became apparent at this early stage. He spent time and patience building up the relationship between himself and Nick and this gradually extended to include the dogs. Once this trust was there, Nick was happy to get on a side-by-side tandem, but getting him to do any actual pedalling was quite a bit harder! Slowly Nick and Ben developed their social communication through riding side-by-side and gradually Nick was encouraged to push the pedals around rather than leave all the work to Ben.

From here, Ben tried a variety of tandem bikes. By this time, Nick trusted Ben completely and would try anything new with no qualms whatever. He particularly enjoys being on the front of the co-pilot tandem where he now helps to pedal and steer. He is very relaxed on this bike and enjoys going at speed and his pedal balancing and steering is improving each week. As well as the tandem, Nick now manages a tricycle by himself, even if it is rather slow and a bit erratic in direction.

Ben is always trying different methods to keep Nick interested and motivated. One of Nick's favourite things is whistling for the dogs and calling for them to run after the bike. This is a great breakthrough considering how scared of them he was before the lessons. The latest trick has been to fasten a stereo to the front of the bike, with an Abba tape playing, and getting Nick moving to the rhythm. It works wonders, although, Ben does get some strange looks as he dances around the park, in front of the bike, encouraging Nick to push the pedals!

Whether he will ever achieve the balance necessary to ride a bicycle is still in the future, but at the moment he is making real progress and thoroughly enjoying the whole process.

The lessons help with so many different areas of Nick's development as well as increasing his self-confidence and making new friends with Ben, Poppy and Fluke.

Many thanks to them all.

Ben Sherratt can be contacted at Lifecyclist@aol.com