"A friend of mine, who has a 19 year old son with Down's syndrome, asked me if I knew of any suitable reading books for this age group. When her son left school, he announced that he wasn't going to read any more books - I suppose this reaction could come from any young person! However, my friend is wondering if the reaction is more to do with the fact that books written for ordinary teenagers/young adults are beyond her son's capabilities whilst the books he can manage are too childish in content and, therefore, demeaning for him. She is also concerned that reading is a skill which needs to be practised, she doesn't want her son to lose that skill. Does anyone know of any suitable reading material for teenagers/young adults that would fit the bill?"

Declan (17) is a huge James Bond fan. His favourite book, which he knows extremely well, but enjoys re-reading often, is The Secret Life of Agent 007, published by Dorling Kindersley. A large, 'coffee-table' format, it is filled with photos and drawings of every James Bond movie (except the most recent one), locations, Bond girls, villains, internal drawings of the various devices that Bond uses to save the world and that the villains use to threaten it. Not too many words, and the pictures are great. Often he reads with and to his Dad, a closet James Bond fan. He never asks me!

A children's book that he still gets a lot of fun out of is Bamboozled by David Legge (Ashton Scholastic, 1994, now out of print according to www.amazon.com , but you might be able to find it in a library). It is a simple story, with wonderfully clear, colourful drawings of very silly scenes, with many, many things to laugh at in each one because they are so obviously ridiculous - a garden bed full of bulbs (light bulbs!), chairs with bumper bars, a mat that is actually a fish pond - it's hard to describe how entertaining it is! In addition to the sheer fun and giggling, there is so much to talk about - what would happen if you stepped on that mat? Would you wash the dishes under an elephant's trunk? Look at him mowing the carpet ... so many funny things. The reading of the words is the least part of the enjoyment, but still good fun, because the girl and her grandfather, whose house is the setting, cannot work out what is 'odd today', and don't think any of the scenes are strange at all.

I have written a review that is available at: http://members.iinet.net.au/~dsansw/spin_rev.html

When Declan was 8 weeks old, we enrolled in an excellent community-based early intervention programme based on the Macquarie University program, and he progressed to mainstream preschool (with support) and very early school experience, followed by most of primary school enrolled in a supported class in a mainstream school, and high school at a special school.

There has always been an academic component in his school programme (sometimes we have had to insist on its inclusion in his IEP), and a language rich environment at home - but he still finds reading and most other academic work difficult and he says, "boring". I think boring means a combination of difficult and not always well-matched to his interests. To keep Declan reading just for the sake of keeping up the skills, or as a performance would simply not work - it has to have a purpose that he can appreciate and that he values or he just won't do it. The last thing we want to do is to make reading a punishment or even a chore. I think he'd agree with the young man about whom the question of suitable reading materials was posed.

His current school suits him very well on the whole, but he does complain when he has to do 'school work' all day - he wants to do 'real work' (a job), which he values much more. He is happier with work experience, TAFE (Technical and Further Education) college and excursions into the community, all of which now occur as part of the school programme. He will be leaving school one week after his 18th birthday in December 2003, much to his delight. He insists that we refer to school as his 'work', and says he's off to 'the office' each morning. He doesn't hate school by any means - he's just really upfront (and I think quite articulate) about the need for it to have practical meaning for him. This year, he is the school captain, and having a great experience being an acknowledged leader - "I'm responsible", he tells us proudly and appropriately. 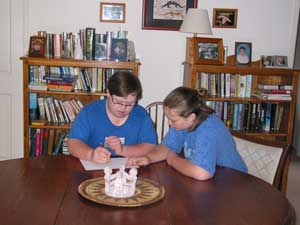 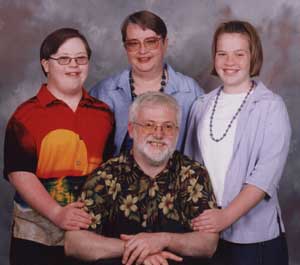